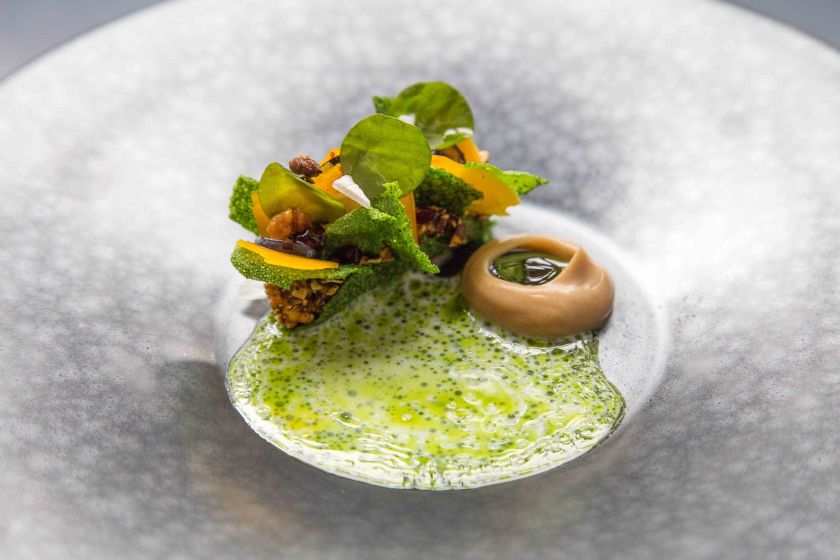 (18.5 / 20) Innovative and supremely delicious food with world-class service. An already outstanding restaurant which has recently found a whole new gear.

I remember our first visit to Librije’s Zusje well. It was in 2014 and within a couple of months of its first opening. We sat on a banquette in the corner, ogling the perfectly tasteful design of the sumptuous dining room, growing steadily more dumbfounded as each step of the precession of perfectly constructed dishes arrived. That morning we had visited an exhibition at the Hermitage museum about the glorious dining habits of Russia’s latter-day Tzars, and we thought it would be deliciously appropriate to follow-up with something similarly pompous for lunch. The meal was a revelation; Some of the most extraordinary art I had ever seen on a plate, replete with a shopping list of edible items I’d never even heard of. A few of months later the restaurant had 2 Michelin stars. It was the first time the guide in this part of the world had ever awarded 2 rosettes to a new restaurant. Something very special was already happening here on the Amsterdam canals.

I should add that in 2014 we were only occasional Michelin diners. Our eating-out life had just begun to re-animate from a 2 year self-imposed restaurant hiatus which had started when our daughter was born. But Sophia’s doting parents were now just about ready to leave culinary hibernation, and by god did we do so with a bang. That dish of octopus, corn and red pepper will live with me until my old age.

And so it was with great joy we returned last week to what has over the years become our very clear favourite fine dining haunt in Amsterdam. Always beautiful, always precise, occasionally even a touch too edgy even for me, LZ never fails to leave a strong impression. But last time I must admit I was a little underwhelmed; We were being fed what was obviously the unique expression of a simply extraordinary kitchen, but it was wobbling on the tightrope strung delicately between the two poles of deliciousness and the avant-garde. That time we had grouse served with tangerine, and that, for my palate, simply was not good. To be fair I have had a life long difficulty with any pairing of meat and fruit, so my opinion is to be discounted on this one. Still, it wasn’t for me and I was disappointed.

Nadya entering the gorgeous lobby of the Waldorf

Not so this visit. This was something else. This was a restaurant making a serious bid for a third star. This was a kitchen still showing the exquisite innovation and mind-boggling flavour combinations that is their signature, but having again raised the bar, again finding the ethereally hard-to-reach balance between clever and delicious.

Head chef Sydney Schutte had we were told recently been on holiday in South America, and the inspiration brought back into his food provided notes of true brilliance throughout the meal. We began with such a dish as an amuse; a sorbet of tamarillo with sunflower seeds and a foam of coffee. How bitter-sweet to be able to eat something this delicious, this well conceived, but also know that I will never, ever, be able to contrive to create anything this good in my own kitchen. This is everything an amuse should be; Awakening the palate with tartness from the fruit, filling the mouth with multiple temperatures, providing texture from the seeds hidden within, and something unexpected in the flavour of coffee to get the cogs of culinary cogitation turning. Miraculous. 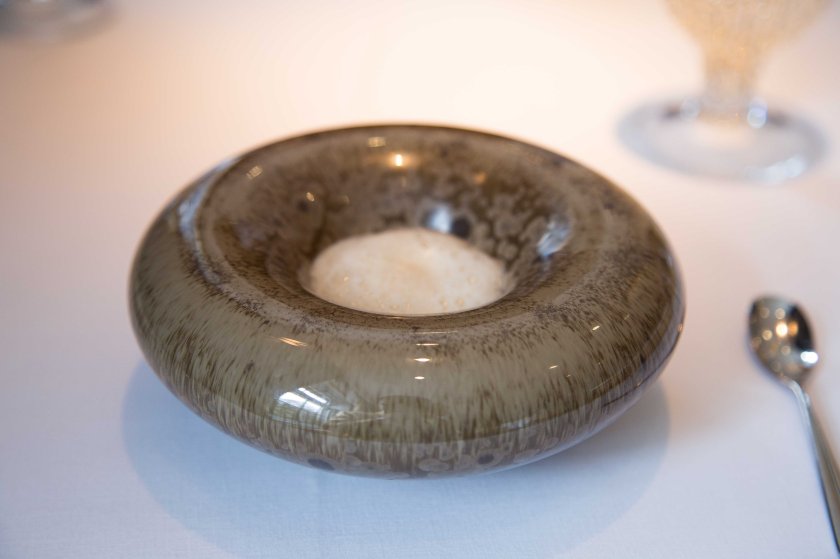 Sorbet of tamarillo with sunflower seeds and foam of coffee

Despite the restaurant being completely full, our usual request to complete the full menu in under 2 hours didn’t faze the fabulous Maitre D’ Sascha Speckemeier one tiny little bit. ‘Of course’. We later learned that the kitchen had received 2 or 3 other similar timing requests and were also simultaneously catering for a table of 8.

The amuses continued with the comedy deep-fried snail with humus on its own acrobatic track, roe with textures of shiitake mushroom, eel with a grapefruit ceviche sorbet and a tiny flammkuchen of dutch shrimp. We beamed at each other in utter bliss – we were back in our favourite restaurant and it was firing on all cylinders. 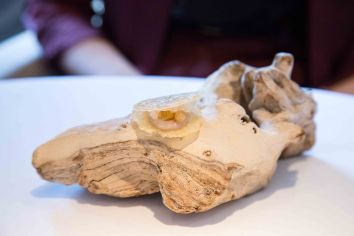 The meal itself started for me with the now classic carabinero. If wasn’t quite sure about this dish when I first ate it, I certainly wasn’t sure when I first saw it. But I’ve come to appreciate the genius inside this worrying aesthetic. Deep water shrimp thinly covering a beef short rib which had been braised into an almost paste-like consistency, with extraordinary crispy ginger leaving just the slightest heat in the mouth, only to be quenched by bright cubes of water melon.

This surf and turf flight of fancy continued for me with a new dish pairing dutch shrimp with veal. Texturally perfect, the sweet shrimp receiving some fatty body from bone marrow, and being offset by the crunch of deep-fried veal tongue. This is a plate I hope stays on the menu for a long time to come.

More fish was brought out, and this time back to a familiar combination; Cod with carrot, fenugreek and rabbits kidneys served with the most unctuous vinaigrette. This is a dish I’ve been lucky to eat a few times now and this time was clearly the best expression of it so far. It was much more rounded, more moreish. I’m salivating just writing this.

Cod with rabbits kidneys and carrot

Librije’s Zusje has long been in the possession of a very special offering for vegetarians. If the main menu is strongly heading towards 3 stars, the non-meat offering is for me already very firmly there. This is not a restaurant where if you have chosen not to eat animals you get fobbed off with garnish from other dishes or a risotto with an egg yolk. These plates are outright masterpieces in their own right, the amount of time and thought which has gone in into each is hard to contemplate. 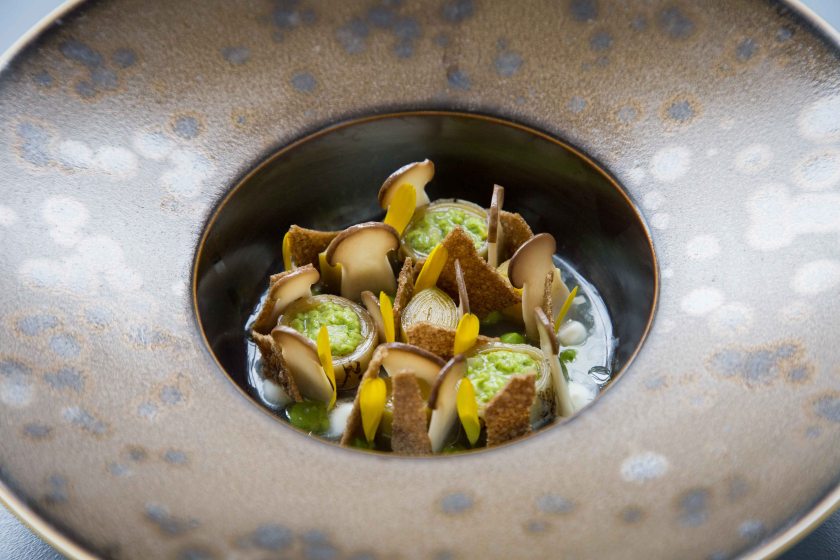 You can see why Nadya is always legitimately excited to come back here. The dishes are beautiful, and I’m told simply delicious. Sadly I can’t say much more about them given so jealously are they guarded by my beloved that I am never allowed to even taste them. Maybe next time I’ll go veggie too.

A new dish which I was actually allowed a tiny spec of was carrot and caraway with fermented garlic. I lost count of how many formats of carrot were being showcased here on one beautiful plate.

Meanwhile I was making my way through two new expressions of plates on the meaty side of the menu: First, a delicious perfectly cooked pigeon breast with an accompaniment of multiple elements of a mole sauce hidden under a blanket (I raised the roof to show you the detail of those elements); and second, my favourite foie gras paired with the jaw-droppingly beautiful duo of picante sauces made from coriander and red cabbage. The mole, another obvious result of the chefs recent travels, was perfectly pitched in spice, never once threatening to overwhelm the delicate game. 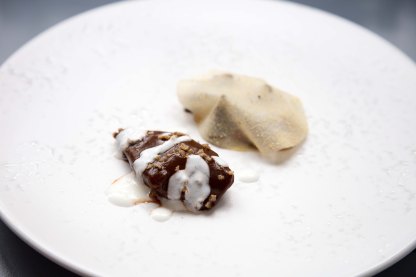 Back to vegetarian for another dish again showing South American influence. Ribbons of beetroot with cocoa and blue cheese. Nadya was less than sold on this the last time she ate it, but again we found that the game had been raised, the offering super-charged and this time she thoroughly enjoyed it.

The tremella mushroom which had been lurking with intent on the table until now, occasionally being theatrically watered by Sascha with sea buckthorn juice, was now ready to be removed back to the kitchen, from where it returned atop an ice cream of butter. Delicious, the wonderfully textural and sharp tremella offset by the perfectly executed ice. 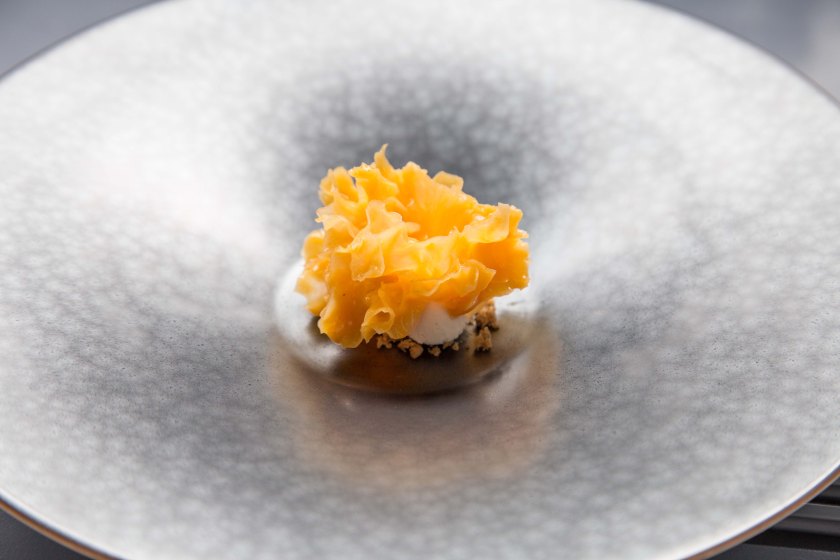 Perfectly on time to end out 2 hour journey, the final deserts arrived. For me the marvelous riff on carbonara – a purposely eggy ice cream served with crispy corn ‘spaghetti’, pecorino and pancetta. Also better than the first time I ate it. Nadya meanwhile was struggling with the supremely delicious vegetarian option, a sweet taco of corn, popcorn, jalapeno and lime. Thankfully she was now completely full and so I got to taste the dish too. It was tremendous.

As a final flourish the signature chocolates came out with coffee, following the beautiful apple martini served on the already iconic frozen apple.

This is a world-class restaurant which was to my mind already at the front of the pack of two stars in Amsterdam. But something is now happening here; Our last lunch was something else. This is a team that is now moving off in the distance, making a serious bid for a third star. A star which I would be overjoyed to see them get. This is a really, really, special place to eat, and which we are blessed to have within biking distance from home. We will be revisiting the other top restaurants in town over the coming months, but so far this year I am firmly of the opinion that this is as good as it gets in Amsterdam.