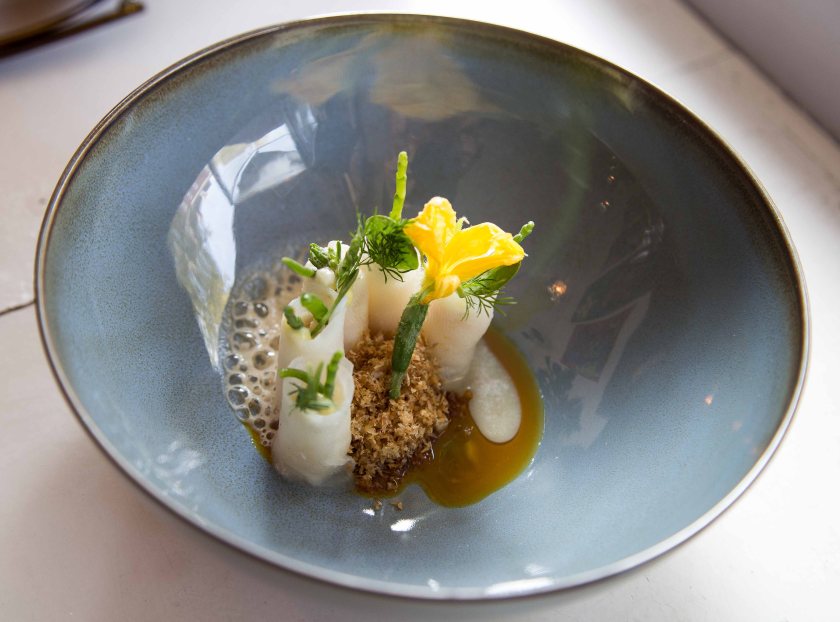 (16 / 20)  Neighbourhood restaurant serving up very punchy Michelin quality dishes at a sensible price point. Attentive, friendly service and an enjoyable dining space, as long as no one is sitting at the table next to you.

(Click on the score to see the rating system and why I bother writing these reviews!)

Run by Swedish chef Alexander Ioannou and his wife Suzanne Sluijter, and holding one star already for three years, Sinne is a little bit of an enigma. One of the couple of starred restaurants that quietly gets on with its business well out of the spotlight, doing just fine and with no one seeming to notice – I don’t recall ever having heard the place mentioned amongst the endless chatter of conversations about Amsterdam’s ever burgeoning dining scene. Perhaps because of this, it’s also one of the last Michelin restaurants we have never been to in town; If we ever make it to Le Restaurant that will be the full set. However it’s hardly as if it’s not busy; I had to book a good month or so in advance to get a table, and it was full on the Saturday night we dropped by, which are both pretty promising signs.

Much like it’s apparently restrained public profile, the entrance to the restaurant itself is also pretty subtle – on our first approach we rode straight past the mild-mannered doorway sitting quietly on Ceintuurbaan in the Pijp area of Amsterdam. Inside its more of the same story, very minimal, welcoming and calm (except for the lightly garish musician portraits on the front wall). The kitchen is open and at the back, kind of framed, and obviously intended so that the culinary workings can be carefully watched by diners. I would also have loved to do just that too were it not for the fact I was taking photos for the review and thus, in trying to get the best possible light, was sat precisely at the opposite end by the front window.

There is a menu at Sinne, but they also follow the increasingly common theme in restaurants that fall somewhere around the 15-16 /20 area, (which is commensurate with the beginning of Michelin territory), and that is to offer diners the choice of a number of courses either as a full surprise, or with warning of what is likely to come. Given we usually restrain ours drinking to a glass of champagne to start the meal, there is no particular need for us to know what the kitchen is planning and that suits us just fine – we happily let them get on with it. The very amiable waiter was delighted to recommend that 5 courses would fit well in our allotted 2 hour dining period, and so, without further ado, we began the beguine.

A little plate of amuses arrived quickly, a cornette of picallili and mustard (snap Aan de poel from last week), and a fabulously flavourful ramekin of potato salad with a chestnut and paprika foam. Tingly on the tongue, quite a lot of background heat from the pepper and delightfully rich with rounded nutty notes. 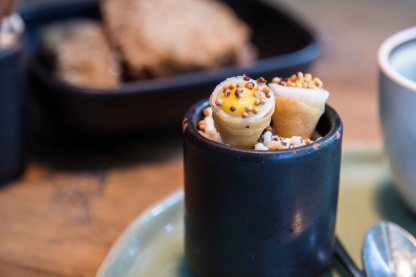 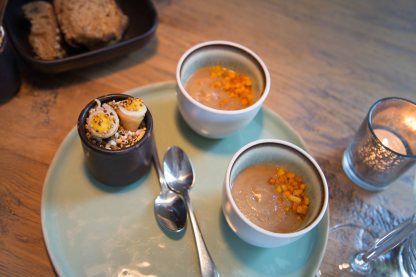 Nadya was eating fish this evening and the kitchen seemed to take full advantage of the fact, quickly sending out a series of impressive dishes which we could both for once share the enjoyment of. Our waiter had already joked that it was all downhill from the amuses, but it seems the kitchen hadn’t quite got the memo as the first dish of king crab may have been the standout dish of the whole meal. It was strong with that fresh ozoney sweetness of crab, its richness offset by the light radish wrapper, and given a warm shellfish hug by a foam of lobster. A beautiful crumble of panko and bonito brought texture and fishy umami, the succulents their seaside salinity, and beurre noisette because, well, crab and beurre noisette are sitting in a tree, K, I, S, S, I, N, G.

If the first course was about classic pairings with a twist, whilst still being sensitive to the delicate crab, the second was more safety-off, full automatic fire. We were told that one of the themes of the restaurant’s cuisine was strong spicing influenced by the chef’s regular travels to Thailand and the heritage of the Moroccan Sous. This dish did not disappoint, bringing almost enough heat to be recognisable as an authentic Thai green curry sauce, but with a delightful balance from the coconut foam and sweet/savoury thai biscuit. The cod itself had been in the water bath and had an interestingly firm texture. I’ve myself cooked cod sous vide a lot and never managed to get it quite like this; almost as if it had been salted. That bacalao-type dryness working fine with the other saucy elements on the plate but alone I’m not quite sure. 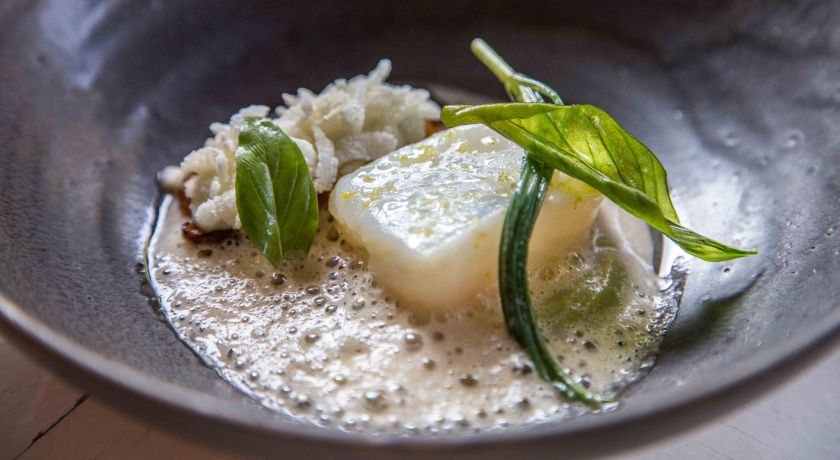 So far so good, and with the restaurant slowly filling up, we moved to a full-blown vegetarian dish of baked celeriac and egg. For a change, we opted for another glass of wine, enjoying the minerally freshness of an well-legged Austrian Resiling which paired fabulously with the uber-rich plate. Indeed it would also have been good with the Thai cod had we been quicker. The 60 degree egg had a very satisfying gel texture, (which was fortunate given I was immediately given Nadya’s one too), bolstered by the rich hollandaise and deeply savoury blackened garlic foam. Hiding underneath, through some truffle, was a stupidly delicious hazelnut cream, which together with the superstructure elements gave a decent hint of lardo-like fatty umami. This was a very accomplished, balanced, piece of cooking but oh so rich… I was already getting full and we had two more courses to go.

At this point a couple came and sat next to us. The seats are so close at Sinne it’s almost impossible to actually squeeze in between to sit on the banquette, and this closeness when full gives the distinct impression of sitting at one long communal dining table. There was a very entertaining review of the restaurant in the Amsterdam rag Het Parool which suggested it may not be a good place to end a relationship, and now I can rather see why. Even without the intrusion of a huge amount of noise (a constant bugbear of ours), the very moderate conversation of our neighbours was audible as if we were talking to them ourselves. As I sadly find myself repeating too often these days, too many covers can kill a restaurant’s atmosphere, and we certainly felt quite uncomfortable with our conversation being joined by two other uninvited fellow diners. 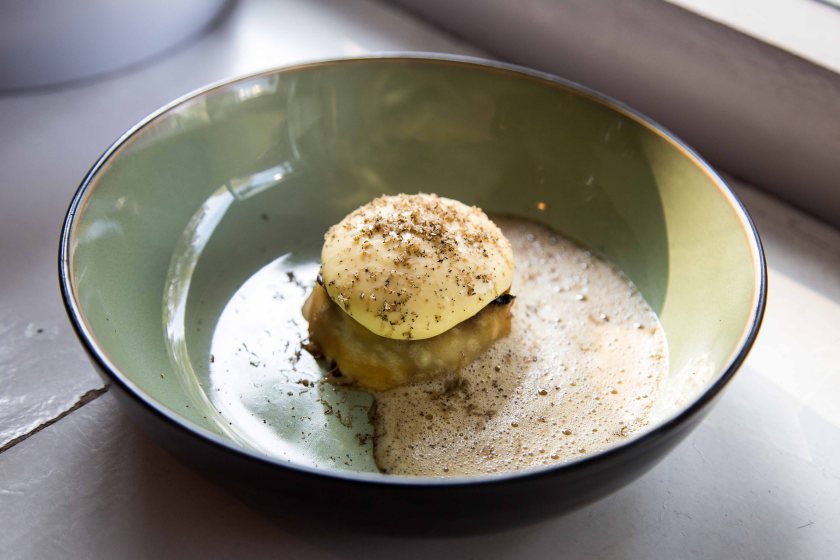 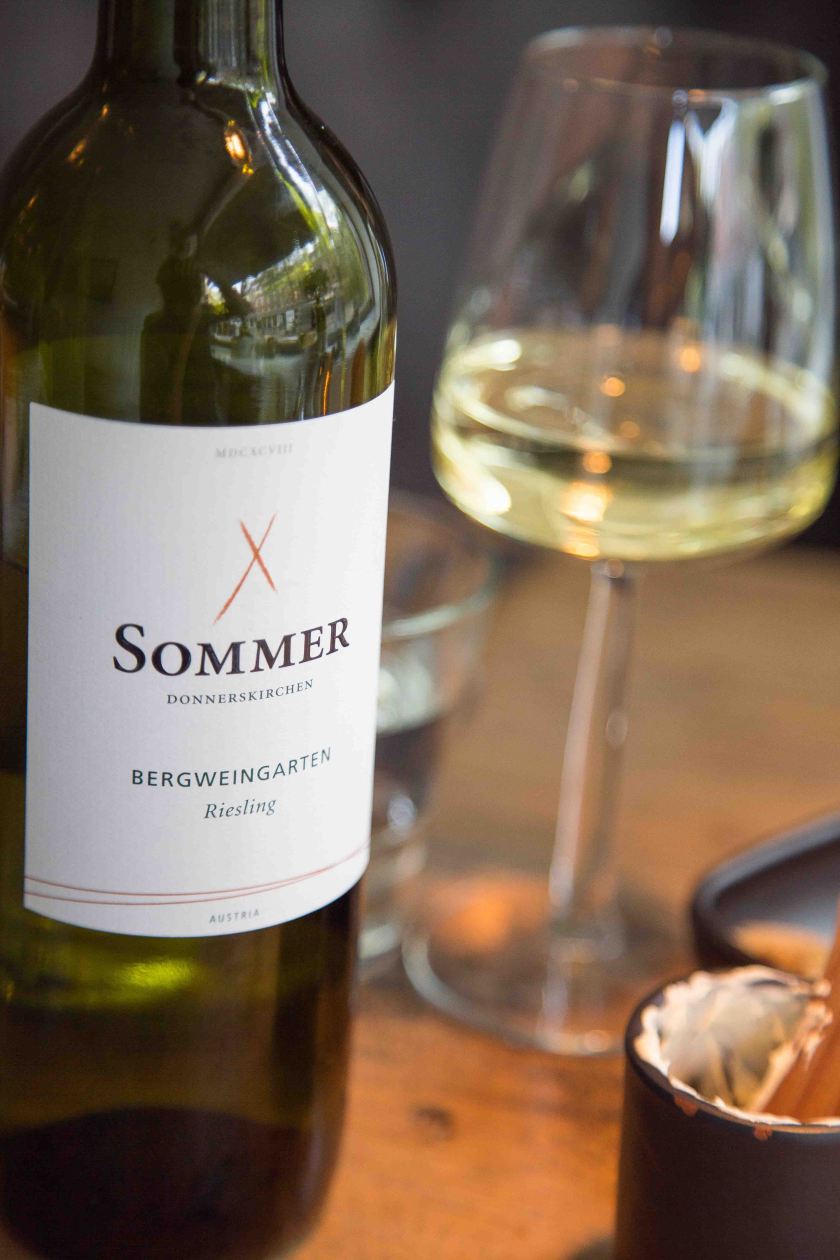 Trying not to pay attention to the what was being said next door, the savoury courses continued with more fish for my wife and some welcomed meat for me. On the other side of the table, a Le Bernadin-style bread-crusted piece of halibut with fregola and pak choi which Nadya described as delicious but rather uneventful. On my side, a 32 hour cooked piece of lamb neck which seemed incredibly dry on first inspection but whose crust quickly gave way to an unctuous, stringy interior. Delicious with its own deep jus and a perfectly cooked piece of sweet potato. I’m not quite sure what this dish had to do with Michelin, but it was perfectly tasty and a welcomed end to meal proper. 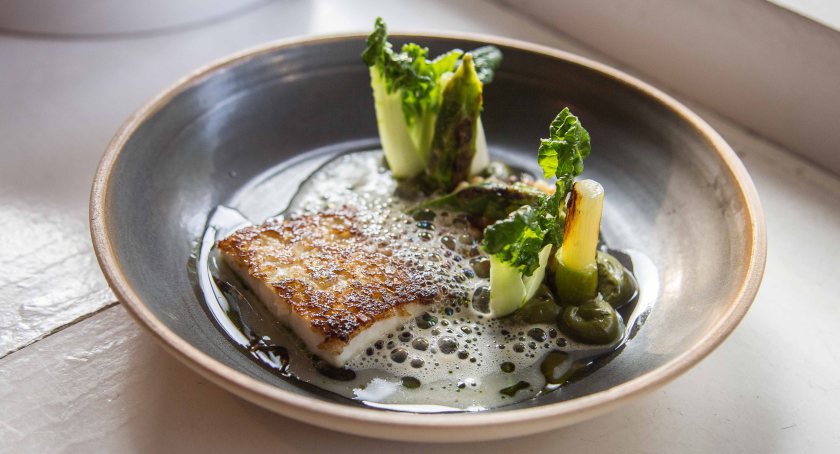 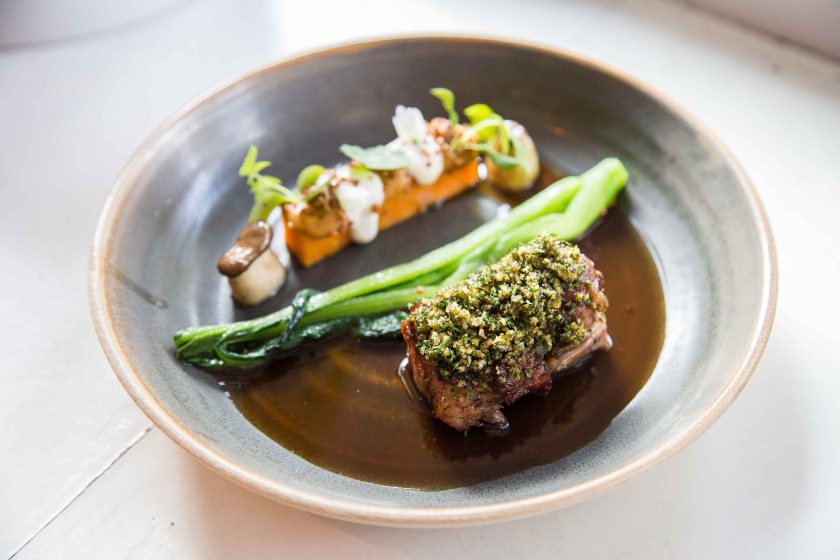 You certainly get well fed at Sinne – portion sizes are surely are on the generous side even for a relatively restrained 5 course tasting menu. It was actually somewhat of a challenge to get through the final two-plate dessert of rhubarb. In the martini glass sat a huge dollop of creme pat, its richness a delightful counterpoint to the acidic rhubarb and extraordinary sugar biscuit which had a wonderfully sherbetty tingle. The fruit truly sung out from this two-pronged offering, never being overpowered by another element and really allowed to remain just the right side of tart. The side dish of sorbet and crumble just notched up the rhubarb flavour even further. A not-too-sweet, well-balanced and interesting dessert which truly championed a much-loved ingredient smack-bang in season. My god was it all so rich though – after the additional pre-desert of deconstructed cheesecake I was now about ready to burst. We didn’t have much more to discuss with our new companions next door, so we paid up and waddled contentedly out into the fresh Spring evening to our waiting bikes. 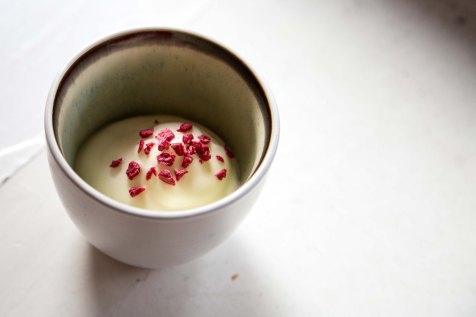 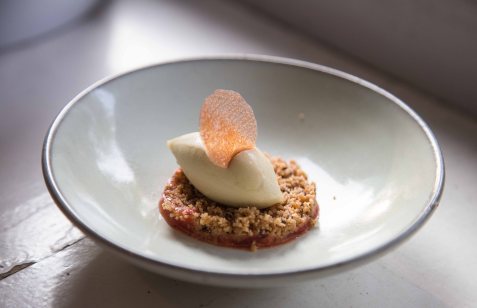 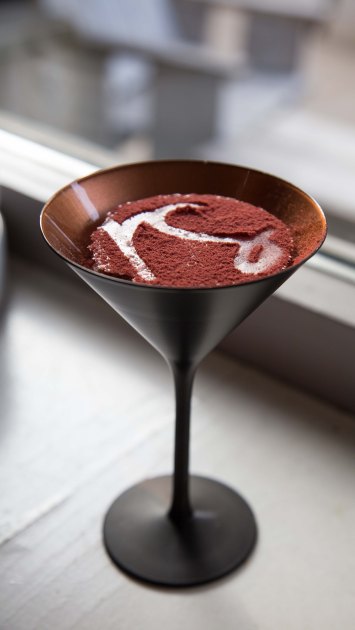 Sinne is a decent neighbourhood spot with really attentive, friendly and well-informed service. The food is bold in flavour and its certainly worth a detour for a relaxed and sensibly priced meal with hints of Michelin star quality throughout. The seating plan is however a full-blown disaster; The tables are simply too close for comfort, and that alone would make us think twice about coming back.