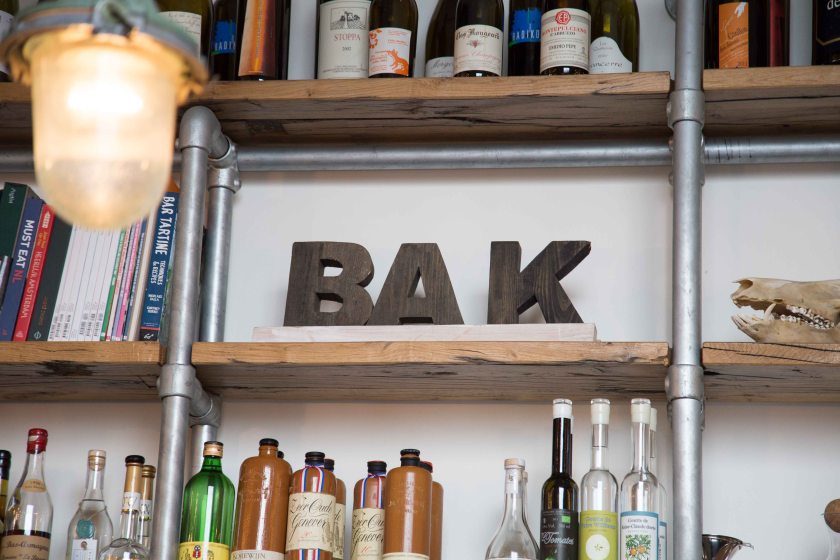 BAK is one of those mid range Amsterdam eateries that you just keep on hearing good things about, but for us one that we never quite managed to get to. Well after about the 9th positive review came past from yet another blogger who I know has good taste in restaurants, I finally got round to making a reservation. To be fair it’s not in the most accessible part of town for us, indeed we live at precisely the opposite side of Amsterdam, but given it’s a city which is easily traversable by bike in 30 mins this is no great hardship…. We took a cab.

So we found ourselves, one chilly spring lunchtime, up by the northwestern docks where a number of interesting restaurants have been appearing of late. This is not far from Wolf Atelier, or indeed newly Michelin starred Mos. BAK itself however has most certainly nothing to do with Michelin; This is decidedly more hipster chic than rosette flourish, complete with a location in a converted warehouse and tap water served on the table in an oversized jam jar.

So having been buzzed in by intercom (how often does that happen at a restaurant?), and once you’ve made your way up a few flights into the cavernous inner building, past beautifully soviet hallways vaguely reminiscent of a university art department, BAK humbly alerts you to its presence via a small bulb-lit sign left lying outside on the floor. The restaurant itself is similarly sparse and unassuming; A long thin effort with the dining room at the front and the kitchen lurking on the horizon at the back. Along one entire wall diners can peek through the original warehouse windows onto the industrial setting of the docks, where old commercial barges have now been transformed into house boats.

There is quite a strong focus on vegetables in the cuisine. This is not a vegetarian joint, and nether is it the vegetables-first flexatarian format that has gained so much recent popularity. If anything this is more just honest farm-to-table than anything trend orientated. In close partnership with local producers, BAK has a firm eye on where its products are sourced, and as of this year has stopped serving any intensively farmed meat (beef/pork/chicken) in favour of wild proteins only. If this review were about philosophy alone I would give them full marks in this respect; There is a great deal to admire about those ethics. Let me also preface the discussion about the food by saying you can eat very well, very affordably, here. We had six very enjoyable courses and two glasses of champagne for under 100 euros. That price/quality point is difficult to find in the city these days.

And so it is with a strong vegetable orientation that the menu starts. A beautiful beetroot medly of beetroot tartar and carpaccio, nasturtium and oyster, with an incredible fermented sauce of rhubarb. This is not the most elegant of dishes but boy does it pack some flavour. Outstanding effort albeit my memory of it is heavily clouded by the fact that this was the first food we saw having sat down at the table 40 mins earlier. Those of you who read this blog regularly will know quite how upset that kind of thing is likely to get me. We didn’t even get any bread for 35 mins. To be fair it was an early reservation and when the bread came out it had clearly literally just been baked, but to me leaving your guests to stew for half an hour while the restaurant warms up is not desperately impressive. But with that said, let’s move on…

Next up and sticking with the clever use of veg, a very well executed dish of carrot; braised, pickled, and crisped, served with goats yogurt fennel and a stunning double fermented creamy sauce also of carrot, Ans again very elegant plating – nothing hugely complex, just well thought out, well executed and pretty. I had already forgotten about the painfully slow service.

There is something quite reminscent about what has been happening in Copenhagen in the food here. Lots of fermentation, a big focus on locally sourced ingredients, less meat, more seasonal. And this was also quite apparent with the next dish of  celeriac which was served with a ridiculously moreish reduced cream the type of which you find a lot in top quality Danish restaurants. With some slight refinement I would not be surprised to see a dish like this at Kadeau, and Kadeau was one of the best places we have ever eaten at.

Carrot with goats yogurt and fennel

So far, so great, no meat and no one noticed. So it was rather fitting that when the protein did arrive, it was a total non-event. I wont say too much about this dish other than that I like pigeon a lot, but this was not a successful demonstration of how to cook it. Despite being perfectly on point in the middle, the outside had been shown too much heat and there was a ring of very dry, quite tough meat encasing the properly cooked insides. The garnish of salsify was perfectly nice but then distracted by a very odd covering of ‘BBQ’d salad’. Not very pleasant to eat.

Moving to dessert we first got a very interesting but barely sweet dish of pumpkin and lovage. Texturally outstanding; The pumpkin sorbet in particular was a masterclass in mouthfeel. B ut somehow the dish as a whole fell a little flat, there wasn’t enough kick in the sorbet despite the glorious structure, and not enough seasoning for a dish served this cold. I think the idea was to have a kind of transition course into a sweet desert and so it was actually very nice to see it wasn’t overly sugary, however without the sugar it then needed something else to lift it,and that was lacking. Very close to being very good. 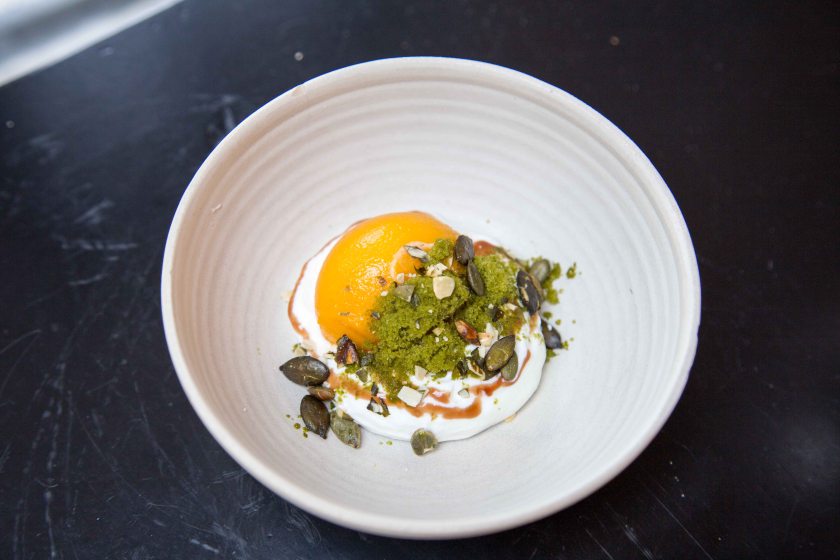 Thankfully the last dish was a masterpiece. An astonishingly accomplished piece of cooking, perfectly balanced for sweetness and saltiness and a slight kick from horseradish, with the extraordinary milk crisp giving a delightful textural counter to the unctuous toffee caramel. I would go back just to eat this again. In fact I think I will. 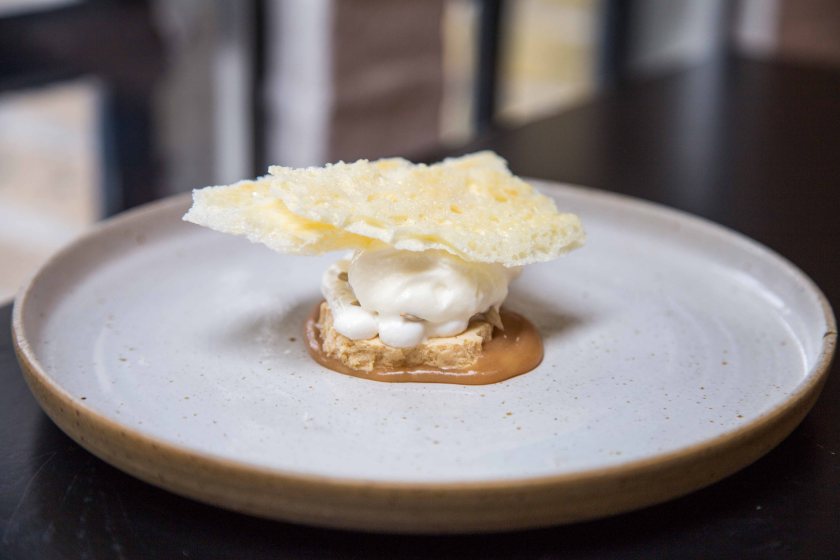 The exquisite milk, horseradish and caramel

So all in all, despite the lazy start, a deeply enjoyable visit to a restaurant we will certainly be returning to. Big thumbs up for the philosophy towards food, for the focus on local sourcing and for making the brave decision to remove ‘cattle’ entirely from the menu. When paired with the kind of thoughtful and flavour-packed execution that we saw in the first dishes, you can expect something quite special. Some of these dishes are already very impressive, and some like the pumpkin sorbet are very close to also being really accomplished. I can very easily forget the sorry pigeon and maybe next time I’ll just go full vegetarian.