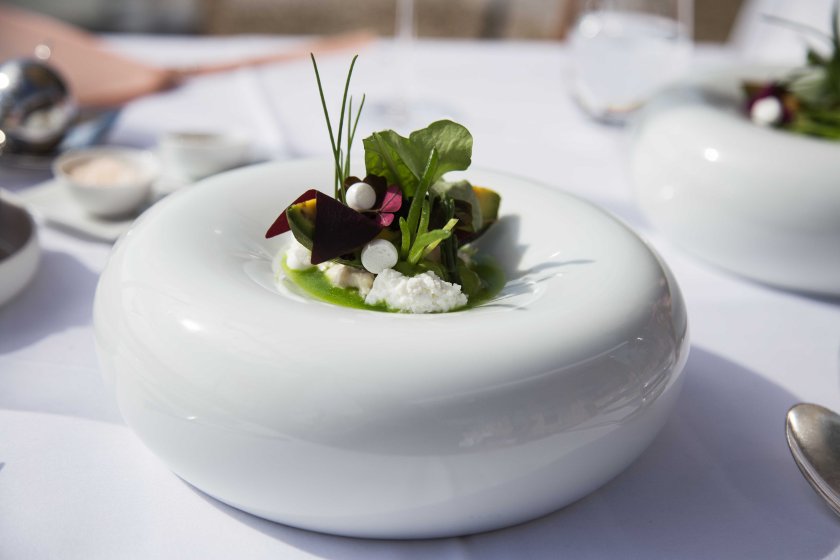 (17.5 / 20) Very satisfying, well presented food in a truly stunning location. Certainly not the most innovative cooking we’ve ever experienced, but very enjoyable nevertheless.

Situated in the middle of the sand dunes of Zuid-Kennemerland National Park, which lies in the West of Holland between Amsterdam and the North Sea , De Bokkedoorns is one of the longest running two stars in the country. Having been built up from a catering company in the 70s, it received its first and second stars under father and son John Beeren (senior and junior) in ’78 and ’91 respectively. Though it’s clearly been extensively renovated and updated since then there is still something very charmingly ’90s about the restaurant. From the retro mirror image db logo on the business card to the teepee-like glass roof construction in the atrium, it still screams of times (recently) past. But given it’s a time I hold with some considerable fondness, when I was getting up to all manner of things as a teenager, the journey down memory lane was certainly no hardship. 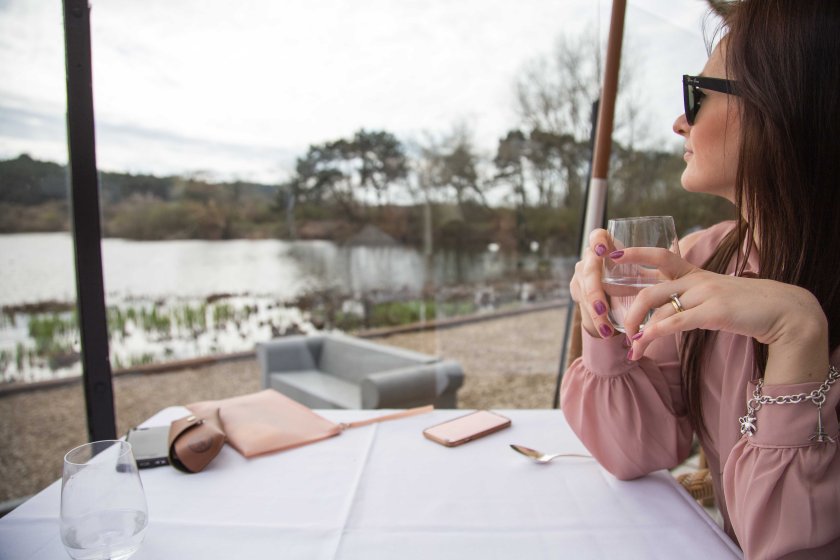 As per usual we were too early. We always eat lunch at the first seating available, and I had (as usual) rather over calculated the amount of time it would take us to get there from Amsterdam, so when we tried the doors at 11:45 we were pleasantly surprised to be both warmly welcomed and immediately shown to our table by the waterside. It was a glorious day; Some 21 degrees, which is unseasonably warm for Holland in April… Indeed I later rather rued the decision to sit in the sun. But the setting at least was unregrettably beautiful, the tables placed on a sun-bathed deck overlooking a lake resplendent with wild swans, geese and all manner of other delicious, sorry I mean beautiful, creatures. Nadya was already beaming at me with sun-drenched satisfaction even before the food had started to arrive.

It takes roughly an hour (if you are not driving) to get to De Bokkedoorns from central Amsterdam, and as we had left our daughter at home with the baby sitter (as per) we asked to eat as much as humanly possible within our alloted 2 hours. To be fair neither of us particularly enjoy sitting at a restaurant for half a day no matter how delightful it is, so irrespective of our level of hurry, we always ask the same – ‘do your worst in 2 hours!’. Sadly this kitchen that day wasn’t quite as ready as some others to be so rushed, and we were advised that 4 courses was about the best they could do in the time. I should add at this point that they were full on a Thursday lunchtime, there were at least 3 parties greater than 5, and two of 8+, so I indeed imagine the kitchen was under some understandable strain. 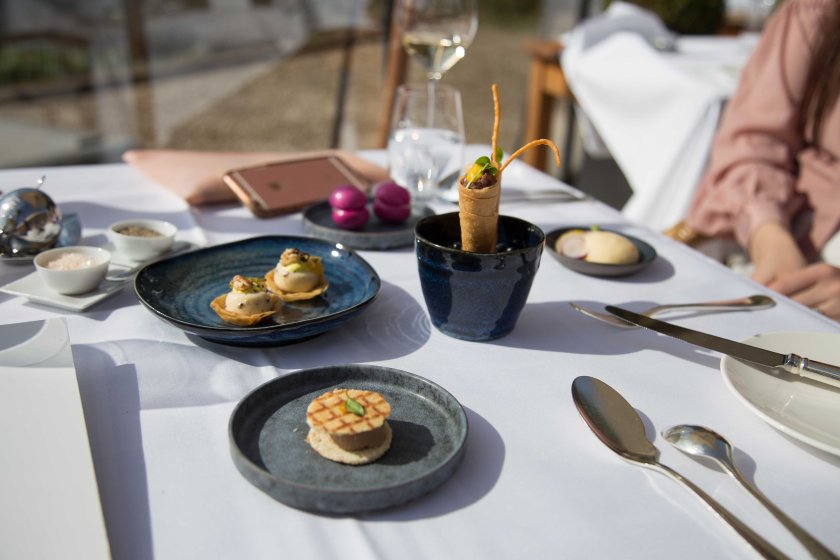 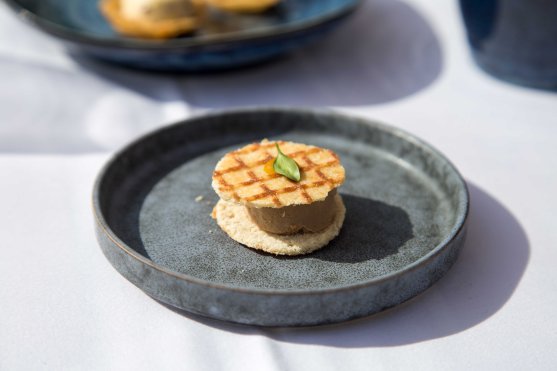 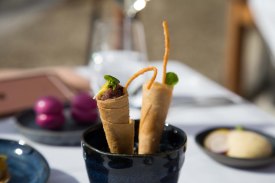 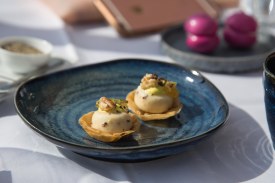 The amuses came out – three elegant bites following the quite familiar Dutch Michelin theme of essentially classic French cooking with a heavy nod to the specific culinary tradition of Holland. There was a bite of foie gras with a biscuit made to look like the classic Stroopwafel, and a delicious perfect temperature tartar in a little pastry cone. I was delighted to see the cone actually filled right to the bottom – it’s the little details that make a 2 star. 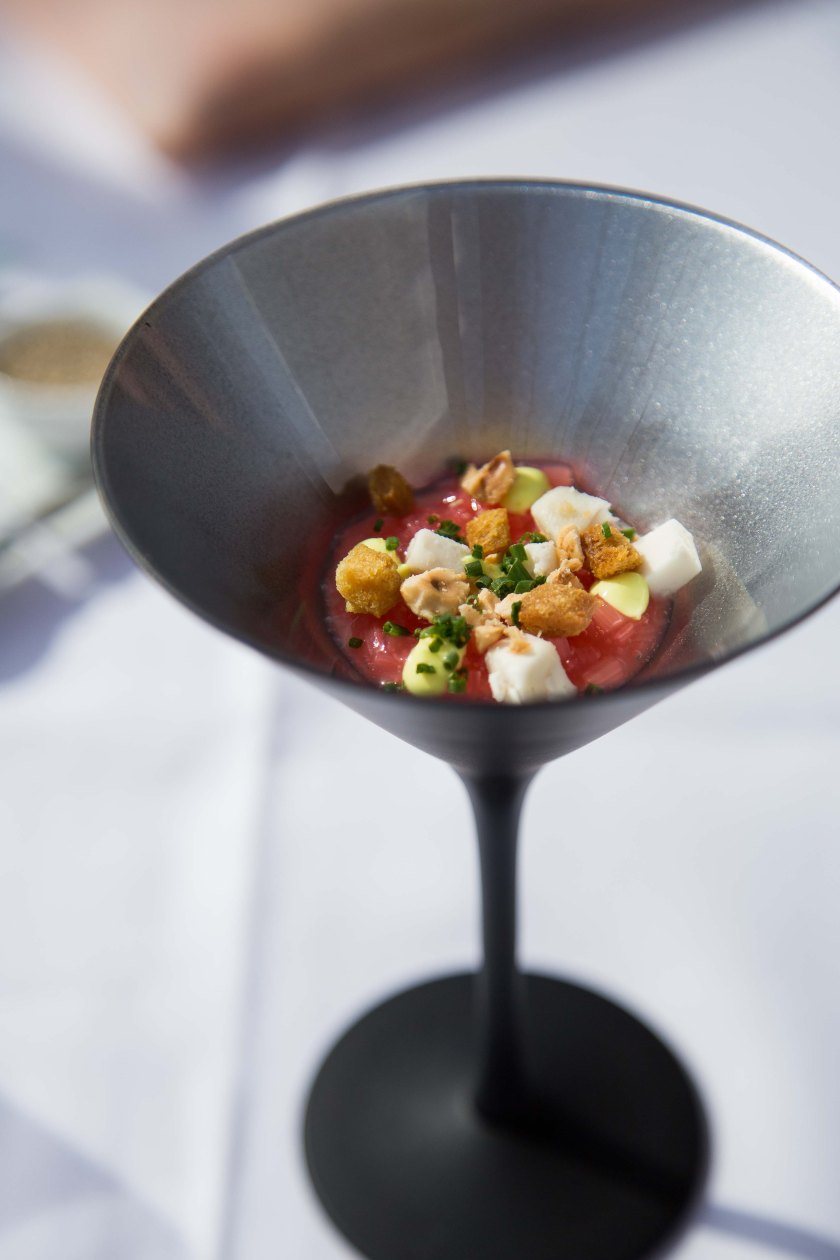 A dish of North Sea crab served with burnt avocado, buttermilk and yuzu opened the meal proper. Served on a truly astonishingly pretty plate like a perfectly glazed donut, it was sumptous and fresh and screamed of the location. De Bokkedoorns is just close enough to the coast to have some slight salinity in the air without overtly saying seaside. The succulents from the dunes added a delicious saltines to offset the rich avocado and subtle creaminess of the crab. Classic combinations executed well with beautiful presentation.

A well cooked piece of sole was the star of the next plate which heavily channeled a favourite dish from this part of the world – fish and chips. Indeed closing eyes, I could be transported to my childhood; Ravenous, at the British seaside, and delighted in the combination of soft but firm fish, the buttery bite of crispy batter and potato, combined with a sharp kick of vinegar that the humble dish is usually doused in. Here the vinegar was transformed into an espuma of sherry and the traditional side dish of mushy peas recreated with a far more elegant mix of purée of spinach and a caramelised onion compote. In Holland a bite size variant of the deep-fried, battered fish we know and love in the UK,  is called ‘Kibbeling’ and we were thereby introduced to the dish by the waiter noting that the crust was indeed some homage to the beloved local beach snack. Indeed the crust, which was essentially little bits of fried batter, itself has a name in England where we call them scraps – the most sought after by-product of a good chippie. 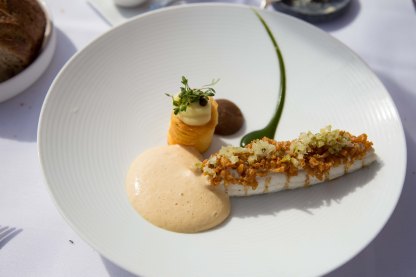 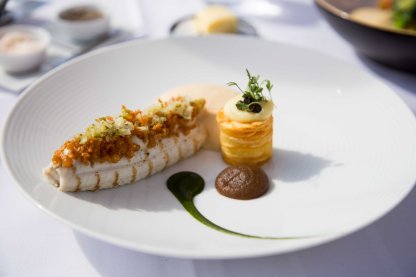 Meanwhile Nadya had seen a couple of solid vegetarian dishes, a medley of spring veg with corn and a corn espuma, plus a stunning dish of mushroom and onion whose presentation alone really reminded us that we were at a multi-starred restaurant. 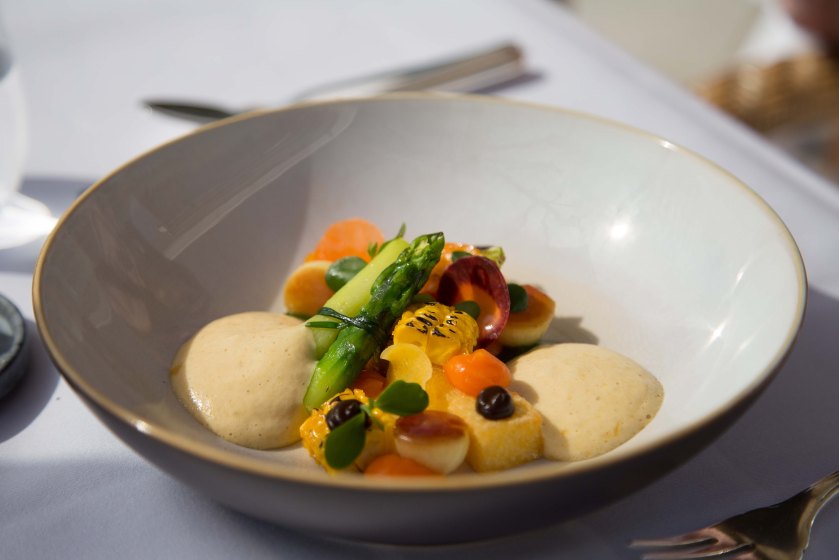 Medley of veg with corn and corn espuma 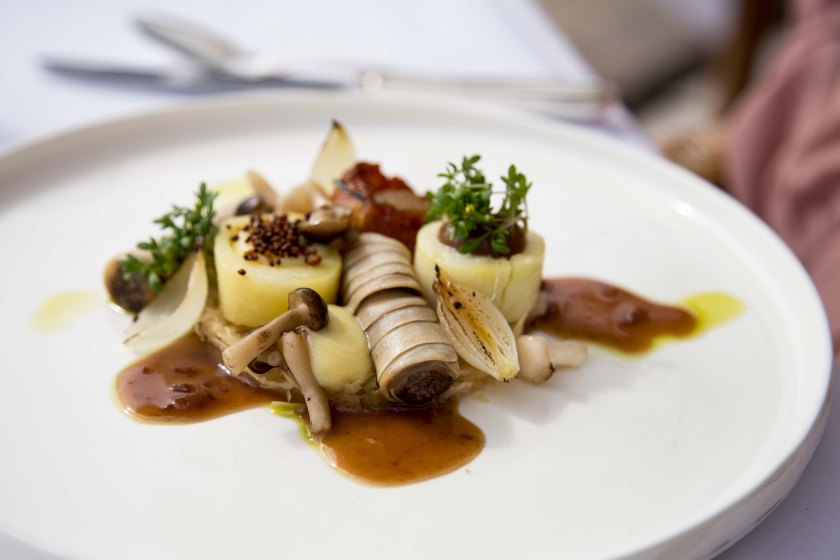 The fabulous mushroom and onion

As is becoming worryingly regular for me, I was rather underwhelmed by the main course. Perhaps I’m slowly being converted into a vegetarian by my beloved wife, or maybe I just need a break from red meat. Either way the peak of the meal was perfectly pleasant to eat but rather unremarkable. Pieces of chulleton, the dairy cow so favoured by steak aficionados in Basque Country, accompanied by potato and marrow, it was a good steak but little more. It’s the kind of dish which tells you more about the clientele of a restaurant than the kitchen I think; This is one to satisfy occasional diners celebrating something, and died-in-the-wool regulars who’ve been coming for 20 years and want something familiar. There’s nothing wrong with either of course, but we are so restaurant-weary that a steak has to be pretty spectacular to raise too many oohs and aahs these days. 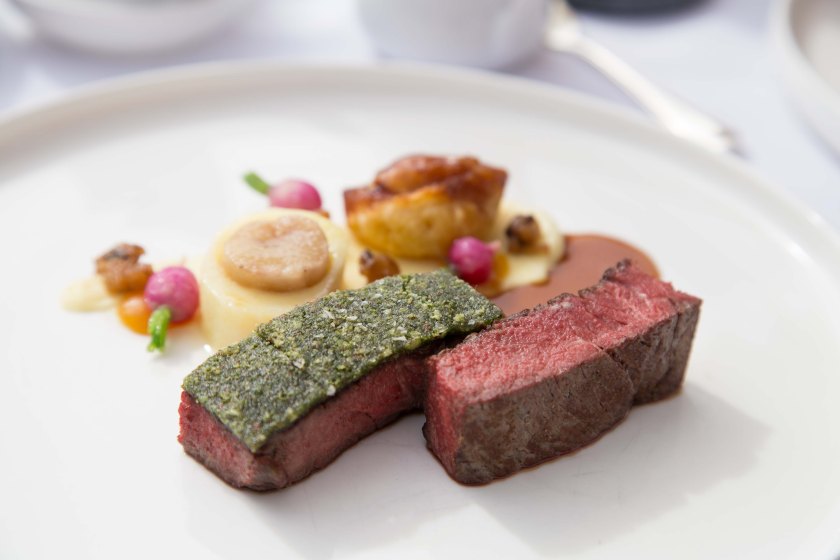 Dairy cow with croute of parsley, with marrow stuffed potato and horseradish

So half an hour per dish and now developing quite a tan from my two hours in the midday sun, we closed what was a very enjoyable and relaxed lunch with desert – a perfectly delicious white chocolate covered mouse, with a lovely refreshing sorbet. 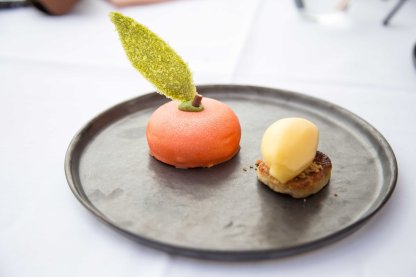 White chocolate mouse with french toast and a sorbet of sukerbole 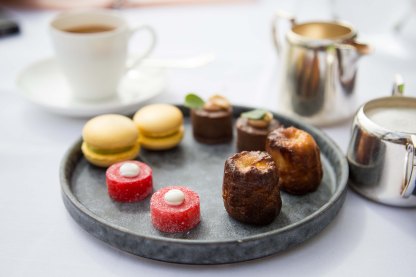 For those craving a classic Michelin experience with a slight Dutch twist this is a very decent restaurant to find it at. Delicious, easy to eat food which is well-balanced and executed as you may expect from a 2 star kitchen. This is not however in any shape or form a cooking that is particularly cerebral, but that in itself only added to the carefree enjoyment of a sunny midday lunch. This was not a day for concentration on a complex cuisine, but rather one for shamelessly quaffing in the sun.. and for that it was verging on perfect.