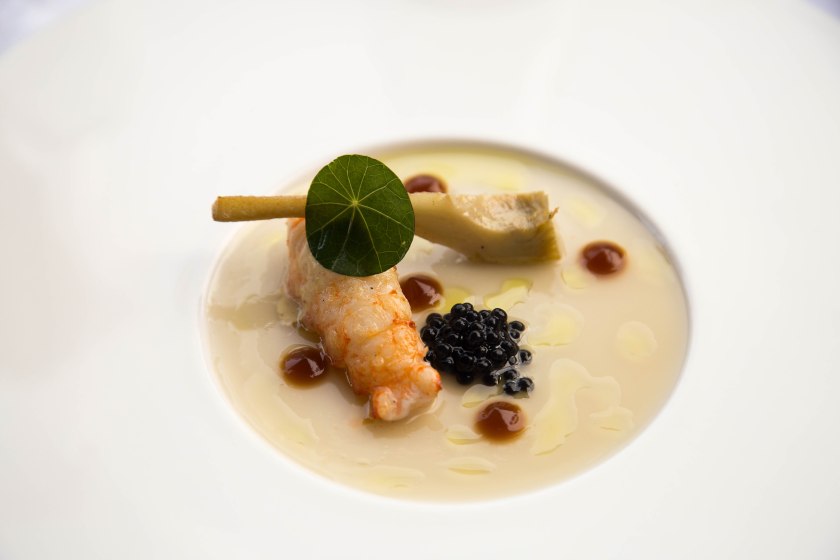 (16.25 / 20)  From a food perspective at least, Daalder, the bistro-come fine dining spot, is already encroaching on some of the starred restaurants in town. And service (for us) is certainly at a new level. This is delivered still at a very sensible price point. But at what point does the food outgrow its surroundings, start demanding fewer covers, more space for its diners, and pressurise prices? Its going to be very interesting (and a lot of fun) to watch how this story progresses…

(Click on the score to see the rating system and why I write these reviews!)

Let’s deal with the elephant in the room first; This meal was by invitation from the restaurant and despite us asking to pay at the end, they insisted it was comped. Now whilst I respect a restaurant’s right to do this, and of course it’s a nice gesture from the owner, it also clearly (at least potentially) compromises my ability to be impartial in what I write. Mea culpa! I take the blame here entirely; I first should have made it more clear upfront, whether invited or not, that we intended to settle the bill as per normal, and secondly could have been much less British when they insisted it was complementary.

Of course it would be remiss not to also add that nothing underhand was happening here… it is very common for restaurants to do this these days. Whether we like it or not food bloggers and sites like yelp form an important part of a restaurant’s marketing, and inviting people to eat with the implication they (positively) wax lyrical on social media is becoming de rigueur. It is however not really what I am trying to achieve with these reviews – I’m personally not doing it for the free meal or any plans to ‘blog’ professionally.

It is especially frustrating in this case because the meal was actually very good. A lot has improved since we were last there, and I would sincerely like to write nice things about the food and the service. At the same time, not to write at all is ridiculous and pretty rude to the team who made an effort to put out what objectively a great meal. Whether or not they made more effort for us than any other paying customer I may never know. But what I can do is be honest and transparent. In addition I most likely will try better to avoid further similar situations in the future. This blog is about a sincere passion for food and for fine dining. It is not an exercise in restaurant marketing or freebie food blogging, which I have been very vocally negative about in the past, and still believe fundamentally degrades via commercialisation those blogs which also once started simply from a desire to write about something that was a deeply held passion : food.

The amuses came out. A meringue of sushi rice with salmon and cream of foie gras was light and delicious. The meringue being ‘cooked’ I think in a dehydrator to give that incredible melt in the mouth consistency and lightness. Salmon and foie gras? Well this just serves to further confirm that adding foie is always a good idea. This first bite was served with a delicious hot/cold pot consisting of a sorbet of pea, warm pecorino foam and olive oil which was infused with something delicious but which I fail to remember. Such are the trials for a food writer at restaurants that have no menu!

meringue of sushi rice with cucumber, salmon and cream of foie gras

Next up on the non-veg side of the table sat a tuna tartar with avocado, watermelon and green gazpacho flavoured with a little kick of jalepeno. Whilst this was perfectly nice to eat and much better than the last time I ate it (having swapped the mango for watermelon), it still felt more safe crowd-pleaser than a dish to get specifically excited about.

We were sitting outside this time trying to enjoy the last of the summer and avoid the difficulties we had last time with the dining room which to my taste can become a little crampt. Early on a Saturday night the market, which takes up most of the street during the day, is being packed up, and the transition from day time bartering to night time revelry in this lively part of town makes for great people-watching. Two separate hen do’s resplendent in extraordinary fancy dress left us alternately dumbfounded and giggling during the meal as we followed their shenanigans in and out of the cafe opposite the restaurant.

Of course thats certainly not to say that the food wasn’t distracting enough. And service this time was perfectly keeping up with our normal pace; Everything in two hours. On this visit, given our enormous and late picnic for lunch, we opted for the 5 course menu which was generously portioned and more than enough for a good dinner.

For Nadya’s vegetarian course she was served a ‘perfect egg’ with coffee and beurre noisette. Sadly Nadya’s concept of a perfect egg is slightly different from that shared by most restaurants, and the poor egg yolk was left to be eaten by her very willing husband. I didn’t taste the rest of the dish but for me the yolk was of an excellent consistency. 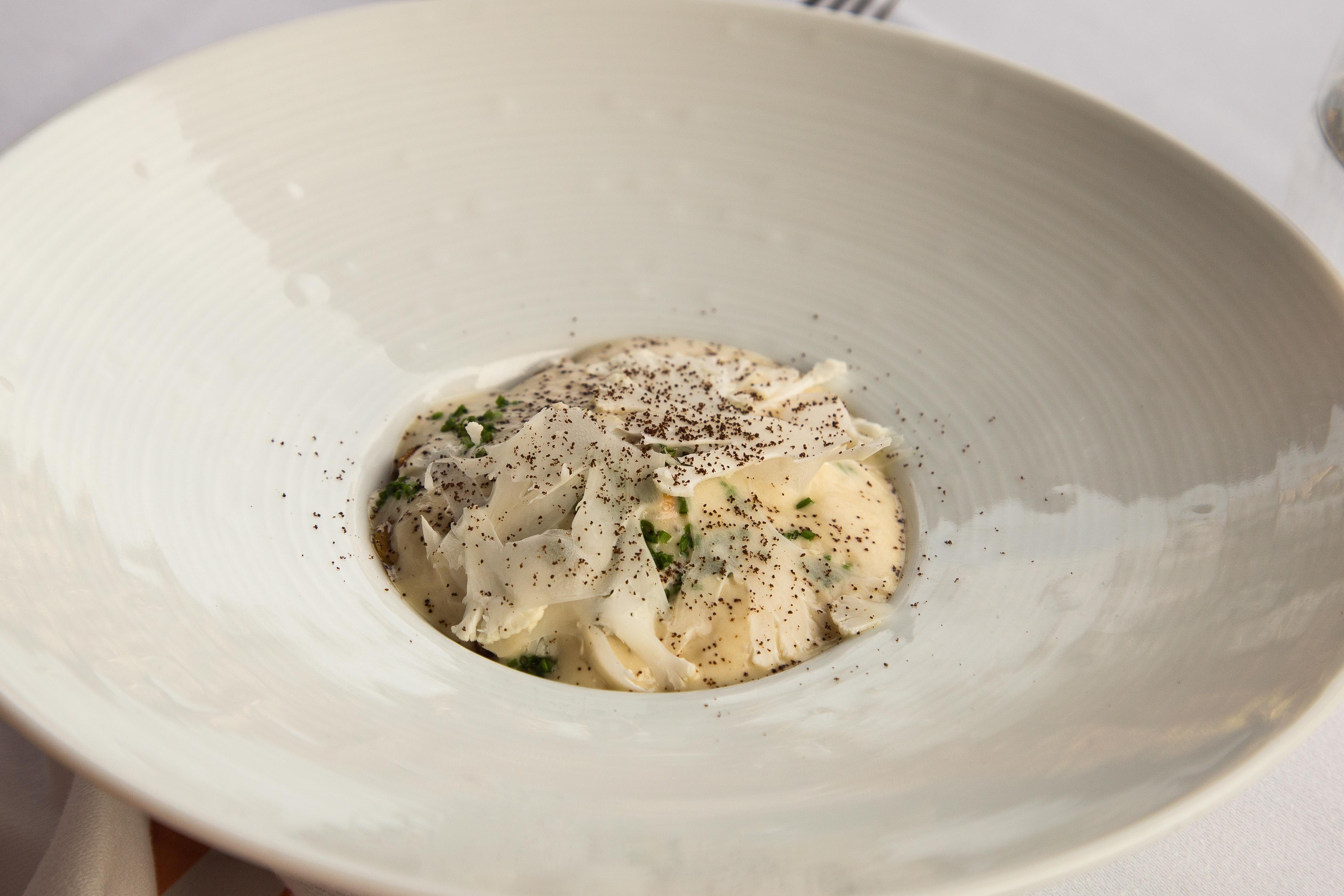 Next up a really very good turbot dish served with a shopping list of delicious and interestingly-combined ingredients; beurre blanc, hazelnut, kumquat, truffle and olive. This was a really delicious dish to eat, the turbot being able to stand up the strong flavours from the individual accompaniments, and somehow it all came together perfectly. The lightly aerated beurre blanc giving a delicious roundness and richness to the plate which nethertheless was very clean on the palate.

Ramping up the class just one notch, we came what for me was the standout dish I’ve so far tasted at the restaurant. Nicely cooked langoustine was paired with artichoke, herring roe, vanilla and hyssop, with an amazing slightly jellified potato jus. The last time I had anything approaching a jus of potato was at the behemoth 3 star restaurant De Librije. There they serve it almost as a broth in their classic rabbit kidney dish, but here that lightness would have washed all the langoustine flavour away. Via slightly jellifying it gave texture and a temperature contrast that was really memorable. Interesting also was the astringent floral-anise note from the hyssop, an ingredient I’ve never come across before. Big dish here.

For my main I had the same slow cooked lambs neck that I had quite enjoyed last time. It had certainly improved in the cooking on this occasion. The meat was similarly meltingly tender but retained more juice than in the previous showing. The black garlic garnish had been replaced for a knock-out umami combo of horseradish, kombu and nori. I’m not sure I would actively order this (if given the chance) again, but it was certainly no burdon to eat! 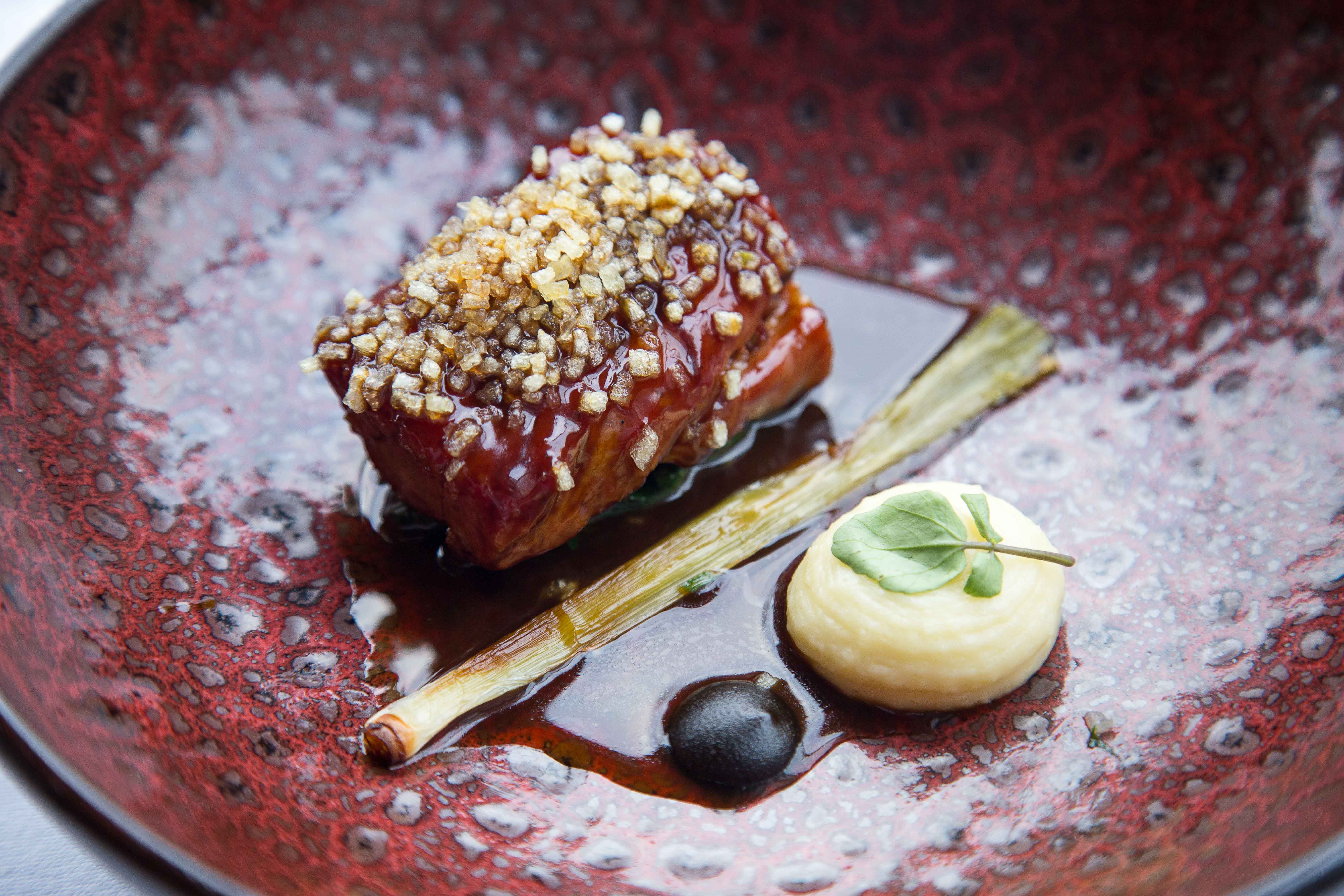 Nadya finished up with what she described as an ‘ok’ risotto with soy bean. There is not much to say about this – we’ve written all that can be written about the tedium of endless risottos on vegetarian menus.

As we approached the end of our allocated couple of hours, and very pleasantly full from both the excellent timing and sensible portion sizing, we were treated with two very decent desserts. First up, a celebration of the mirabelle plum with jasmin, juzu and ginger. This was both a beautiful and a really nicely balanced dish for sweetness and acidity and richness of mouthfeel. The plum really shone through, with pleasant little hits of the heat from the ginger.

Last up, sincerely one of the best ice creams I’ve ever had the pleasure of eating. Perfectly smooth, perfect temperature, huge hit of hazelnut – just magic. And of course we (and all the chocolate bar manufacturers) know that hazelnut loves cream, caramel and chocolate. I could have eaten four of these… if I could have wrestled them away from Nadya that is.

Daalder is a bit of an enigma. We always knew given the experience of their kitchen that it could easily turn out Michelin-quality food if it wanted to, but was that really the intention in this neighbourhood bistro? The first time we went it seemed that wasn’t the aim – indeed the food was very much high-end neo-bistro with a similarly relaxed service and a quite boisterous dining room. At the time I wondered if the food really matched the surroundings. Now I must admit I’m even more confused – apart from the tuna dish and the slightly lazy vegetarian offering, this is no longer just  neo-bistro fare. The service too has found a whole new gear – clever, attentive, and friendly. (I do admit its pretty difficult to make many conclusions about the service and success of the dining room seating given we both sat outside and were there by invitation, but still).

So what to conclude? Last time we went I wondered how realistically successful the concept of fine dining could ever be in this setting, with this many covers. For me, for example, there is a fundamental link between the style of food and noise levels you have to endure whilst eating it. I’m still not sure in the end whether the combination here makes complete sense to me, but what I can say with complete certainty is I will enjoy coming back to continue trying to work it out. At the current standard the food is really very, very, good and a few of these plates currently on offer are clearly as good as the best on show at some of the 1 stars in town.