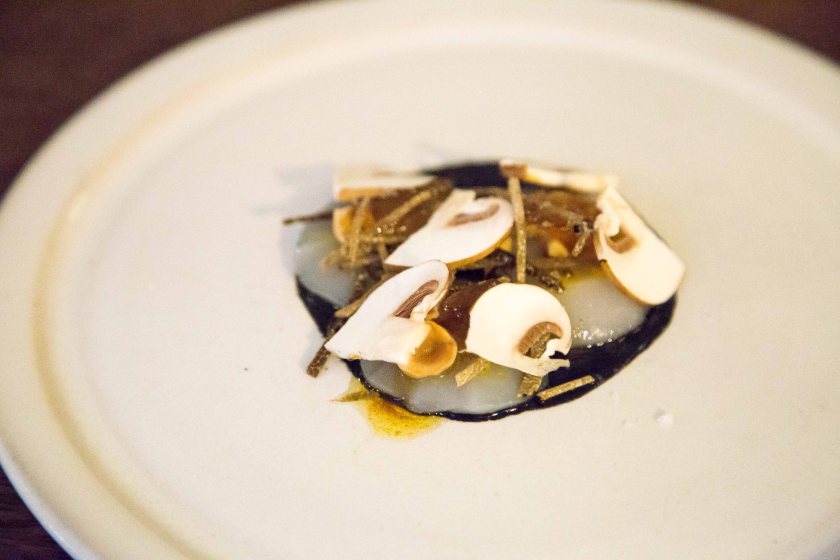 ( 18.5 / 20)  Absolutely outstanding demonstration of how to cook ingredient-driven food with a clear sense of terrior, but also, more importantly, with passion and a great deal of fun. This is an astonishingly good restaurant, with a perfectly pitched service, that takes the casual fine dining concept and shoots the lights out.

(Click on the score to see the rating system and why I write these reviews!)

It’s been quite some time since I went restaurant hunting in my home town of London. Indeed I’ve lived abroad so long that I can hardly anymore really call the place home at all. During the last seven years I’ve been trying to be an expat, trying to learn how to live somewhere else, and with that comes a certain requirement of forced separation. After all, living in a different county only to return ‘home’ at every possible moment is nothing more than glorified commuting. So, it’s been a while since I got to eat out in the big smoke, but was recently afforded a good opportunity to eat three meals in town during a tediously lengthy business trip. As I was travelling alone I wasn’t much interested in sitting at a starched Michelin table all night, so opted for some more casual fare. That ended up comprising a trip to Chinatown to get my Cantonese duck fix, Barafina for tapas with an old friend, and The Clove Club – now the highest rated UK restaurant on the restaurant marketeers’ favourite list ‘The World’s 50 Best’.

And in keeping with the philosphy of that list, despite having a star from the more reliable guide, there is something quite casual about the whole Clove Club affair. Set in the lightly-refurbished Shoreditch town hall in the painfully hipsterified near-East end of London, the restaurant has a spectrum of seating options ranging from a stool at the bar, through informal tables scattered like a pub setting in the front room, to a more formal dining room at the back. I opted for the former, bought my ticket to ride and hopped on my little stool by the bar, excited by the prospect of finding out what all the fuss was about, but increasingly concerned that the growing darkness of the room would mean I’d have no photos to show you. Thank god for Lightroom.

Eve before the difficult-to-compute tagline of apparently being one of the best places tp the eat on earth, conceptually the food promises much. The marketing blurb speaks gnereally of underused British ingredients, but the delivery has an unmistakably classic Scots brogue. I jumped at the chance to upgrade by 5-course pre-purchased ‘ticket’ to the full 9 dish journey which, over the course of a my self-imposed 2 hour time limit, showcased a dizzying array of classic UK produce from the best of Orkney scallops to truffles from Wiltshire, plus trout, pheasant and mallard, all washed down with a few glasses of delicious faux-Champagne from Kent. Though despite the purposely informal setting, the food is unmistakably produced from a very high-end kitchen; Chef Isaac McHale himself having worked with Tom Aitkens, spent 6 years at the Ledbury, and having had a stint at both Noma and the current (albeit rather peculiar choice of) World’s 50 best restaurant, Eleven Madison Park.

The amuses came out – a bit of a hit and miss start. First up a crab tart, with hollandaise of beurre noisette and deviling spice, served in an upturned spider crab shell. This nice albeit slightly unremarkable opening was followed by an entertaining signature nugget of buttermilk fried chicken offered up in a basket of pine. It was great; The crisp, succulent flesh being given a delightful lemony astringent nose from the shrubbery. And lastly I got a small bun encasing some under-seasoned haggis. The whole affair was quite dry in the mouth and to be honest at this point I was wondering what the fuss was all about.

The plates were quickly cleared and thankfully, and with a swig of Kent’s finest sparkling wine, we turned to fish. The next two dishes were a triumph. First, a beautifully rich smoked trout with just the right about of lemongrassy kick from sansho pepper, enveloped by the most wonderful rich, earthy and delicate potato foam. Underneath were some little crisps (I think also potato) for texture. Here the humble seasoning worked perfectly, letting the subtlety of the fish sing.

But if the first dish was something like a warm hug, the next was nothing short of a full-frontal assault by my old friend Mr. Umami. Raw scallops from Orkney thinly sliced, but still with enough body to get that sweet ozoney flavour of the sea, were paired with a truckload of truffle, lifted by acidity from the citrus without ever threatening to overpower, and given a beautiful nutty textural contrast first by hazelnut and then via raw shaved button mushroom. Sitting alone, I stared into the middle distance with what must have been a look of equal parts surprise and joy – this was one of the best things I’ve eaten in recent memory. Astonishing.

At this point, knowing perfectly well how extraordinary the dish I had just eaten was, and with a rather British knowing mock self-deprecation, the AGM came round to ask if it was ‘OK’. Still in shock I mumbled, ‘very good, thank you’ and took another swig of wine.

Further, it was indeed as if the kitchen also knew perfectly well just how bone-chillingly good that dish was that at this point the foot came back off the pedal. Pausing to take stock (so to speak), a delicious and again subtle broth of chestnut and oyster came out, followed quickly by home-made sourdough bread. This was served with an amazing home-churned butter and three different cuts of belly ham which was sliced and knowledgebly described by the bar staff directly in front of me.

At this stage let’s indeed address the service. Sitting at the bar you are aided by a mix of different people; The very affable AGM Sean Cooper, the equally courteous and entertaining bar staff, and cooks who take turns to bring the dishes out to explain what you are about to eat. It’s a delightful mix of friendly Maitre D’ shtick, barman banter, and slightly over-earnest young kitchen professionals, that all makes for a really fun dining experience. If you sit on the right side of the bar you can also see straight into the kitchen, whilst those with a table in the main dining room can observe the chefs close at hand doing their thing in their wild habitat. Open kitchens are always fun for those of us who are almost as interested in cooking as they are in actually eating.

Moving on and ramping the flavour back up again, some pieces of perfectly fresh, firm monkfish were served with a foamed green peppercorn hollandaise. On the other side of the plate a Morecambe bay shrimp sauce packed a huge prawny punch, and a crisp celery stick gave a little palate-cleansing relief. This dish was all yin and yang; Monkfish can take a lot of powerful accompaniments without getting lost, but there was something very clever about the balancing act of super-rich dark shrimp reduction and the light, fluffy, but still deadly decadent, hollandaise. Cancelling each other out, the flavour of the Monkfish was also left to sing in its own right.

So long and thanks for all the fish. It was about an hour through the meal and I was already regretting having ordered the entire menu at Barafina for lunch. Well, it wasn’t getting any lighter as the meat dishes started appearing. It takes an almost criminal intent to make a tortilla out of black pudding, let alone top it with suckling pig. Nethertheless and with no cutlery in sight, it disappeared in a few glorious bites hand to mouth, the slightly geographically incongruous berbere spice giving just the right amount of kick to wake the whole piggy combo up. This was a British chef missing a full English, recently back from his holidays in Mexico, having taken the scenic route home via Addis Adeba. Another spectacular dish. The sublime porcine bite was quickly followed by one of my favourite Autumnal combinations of duck, pumpkin and Brussels sprouts. Unmistakably wild in its deliciously chewy texture, the mallard had been cooked very pink and treated with respect paired only with a deep jus to lift its own flavour. Simple and very good. Taking another small breather, we paused for some theatre. A hundred year old boal Madiera served on a silver tray, and seemingly already decanted into a crystal flask, was brought to the bar. Having been allowed a small sip of the wine, the glass was topped up from the decanter with what was now revealed to be a hot pheasant and ginger consommé. Wonderfully evocative of Christmas, long walks in the countryside and log fires, I savoured every last drop. Indeed the concept of stock as something to be enjoyed like a fine wine is at once so fascinating and at the same time so very obvious. Again a simple, but very clever little twist.

Whilst still now mentally somewhere on a shoot in the British countryside sipping  Madiera-infused pheasant broth from a hip-flask, the king of the hunt – Roast venison (fallow buck in this case) was up next. It was served with an ash-coated celeriac, a delightful little sausage also of venison, with blackcurrant and smoked bone marrow. But the sausage was the star of the show here, so meaty and juicy, and the addition of the smokey bone marrow gave a nice fatty roundness to the otherwise lean presentation.

Now verging on bursting point, I must admit to having felt some small relief in seeing desert. A perfect-textured caramel ice cream quinelle was sat amidst a light potato mouse with a dusting of coffee. We’ve seen a lot of potato appearing in deserts over the last year but this was one of the more sympathetic to the humble tuber. The caramel wasn’t over-dark or over-sweet and you were allowed to taste each element, each texture, each temperature, in isolation. It was quickly followed by a refreshing granita of fig leaf, a nice astringent and clean sheep’s milk yogurt ice, and more figs.

Now eating only by candlelight and precisely on time to finish up in my allotted two hours, the final flourish was delivered. A slightly heavy barley cake with marmalade cream, delicious salted caramel chocolate and fruit leather all appeared in front of me. And, as a last farewell, a shell-encased liquid bonbon of Dr Fergus Henderson’s hangover prescription of Fernet Branca and Creme de menthe.

To say I was pleasantly surprised by my candlelit dinner for one at the Clove Club would be a gross understatement. I’ve written a lot recently about the challenges of producing high-end cookery in humble surroundings, and more often than not something doesn’t quite ring true. But somehow here today they sang with perfect pitch. This is truly an ingredient-driven cuisine and one that screams not only of the UK but fundamentally of the best of Scotland. Technically it is very accomplished but at no point does that technique threaten to overwhelm the sheer pleasure of eating. This is a chef who clearly loves to actually eat and not just paint plates. The food is careful, full of respect, and yet utterly joyful. Moreso, it is deeply successful in elevating classic British combinations without ending up in a pretentious froth. But moreover it was downright delicious, and that’s why, even in a city with such a multitude of amazing places to eat, the next time I’m in town I will most certainly find myself here again. Next time hopefully with some company.