You can eat pretty well in my adopted town of Amsterdam… which is fortunate given eating is one of the few things I really excel at.

Leaving your home to live somewhere new is never easy, and when food is as important to you as it is to me, leaving a city which has as world-class a food scene as London can be verging on terrifying. But I landed firmly on two feet here all those years ago; Amsterdam definitely knows how to eat well.

I’ve actually been coming to The Dylan hotel for much longer than the 6 years I’ve been frequenting its flagship restaurant, given I often stayed here when I was in town on business travel. When we got married at the Museum van Loon a few blocks down the same canal, we spent our wedding night at The Dylan. So it’s pretty close to our hearts. Needless to say it doesn’t hurt that it also houses an outstanding restaurant, and one which we personally hold in pretty high regard.

This was my 7th (I begin to lose count) visit to Vinkeles and second time at the Chef’s table. And any poor soul who has had to put up with me talking about the Amsterdam restaurant scene knows I think a lot of the place. Things change through time; The menu is overhauled regularly and items come and go, though within season you’ll almost always find the signature dish of perfectly cooked pigeon royale on it. From my first visit sometime in 2011, I recall quite vividly an amazing hot and cold dish of potato and caviar which looked like a savory version of Peter Gilmore’s snow egg. We were talking about it for weeks. 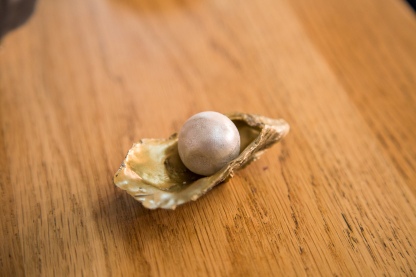 But it also moves with the times, and currently shows a subtle nod to the Asian influence that has permeated a lot of European fine dining over the last years, whilst never threatening to lose it’s essentially ‘modern French with a Dutch spin’ character. I’d describe it as conservatively delicious approach; There never seems a desire to run the risk of putting diners on edge just for the sake of being different. No kombu and foie gras, or grouse with tangerine here. Just interesting, always really delicious food that leaves you satisfied. And that satisfaction is not just of being full, although you certainly will be if you eat the whole 8 course menu. More so, that if you’re interested in food, this kind of cooking is also both intellectually and artistically satisfying too. Getting that balance right between creativity and taste, between intellect and deliciousness, is something that fascinates me. When you get it right, like they do at Azurmendi for example, where the diner is left simultaneously aesthetically surprised and salivating, it’s like nothing else. Perhaps that’s why we keep coming back – I’m always hungry and it’s always delicious.

Speaking of salivating we can proceed to the amuses… The meal starts with three introductory notes; The classic pearl shot which I believe was developed by Tommy Den Hartog when he worked here, and which he’s reproduced at both Johannes and now at the revolving restaurant Moon. This dish is already so deeply associated with Vinkeles it would be a shame to see it come off the menu. Likewise, it would certainly also be a shame to eat at a high-end restaurant in Holland and not get some format of eel – one of my favourite ingredients of all and thankfully much favoured within the Dutch kitchen – it appeared next as a tiny crunchy bite. Lastly, to really prepare us for the menu, next came an ingenious concoction of sea bass and cucumber encased within a light cucumber meringue. I think dish is a cracker really, it’s the epitome of what an amuse should be; Interesting to look at, interesting to taste, light, and full of umami, preparing your palate for whats to come.

Again we chose to sit at the chef’s table, about a meter from the pass. Of course it’s a lot of fun watching the chefs at work, but it also manages to still be quite an intimate little setting in itself with your dining companion. Best of both worlds for me. The main dining room certainly leans towards a classic refined Michelin setting; Its elegant, restrained and, sadly for those of us who take photos of our food, it’s also very elegantly lit. So for a whole range of reasons I think we’ll continue to want to eat in the kitchen from now on when we return. 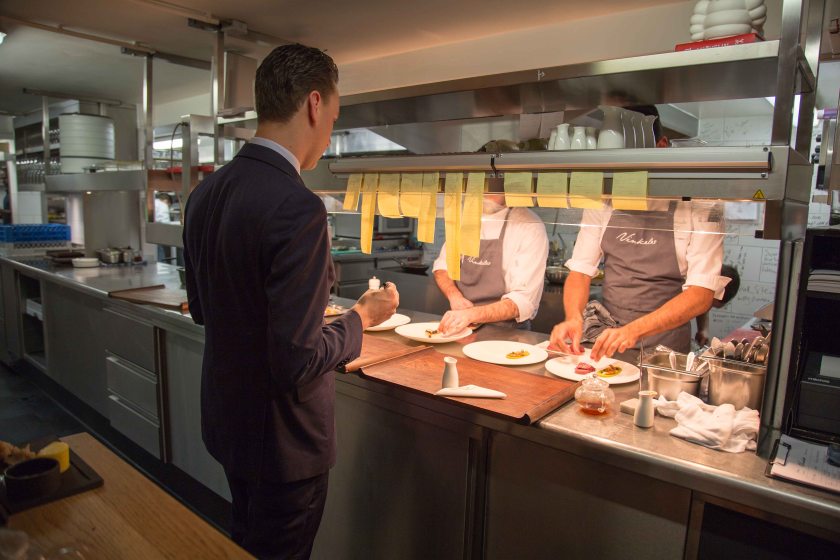 Vinkeles offers a 8 courses tasting menu for €125 ,with supplements for special items like caviar or wagyu, which puts it towards the higher price end of the group of 1 stars in the city. Frankly I think that’s appropriate given the ambition of the restaurant is clearly to move to 2 stars; It already has a score of 18 in Gault&Millau, which is similar territory to some of the places already holding 2 macarons, and this year also celebrated the Maitre of the year in Casper Westerveld. Things are clearly going in the right direction. But I give up trying to predict the Benelux Michelin team – like some of my fellow (and better known) blogger colleagues, I was surprised to put it mildly by the new stars this year. So is Vinkeles already a two star restaurant? Time will tell. Is it a mile ahead of the other 1 stars in town? Clearly.

As usual on the menu, there was a beautiful array of shell-fish. The first dish of crab I found slightly under seasoned. A little bit like the kohlrabi was washing away the subtle flavour of the crabmeat… but otherwise perfectly delicious, and certainly very pretty. 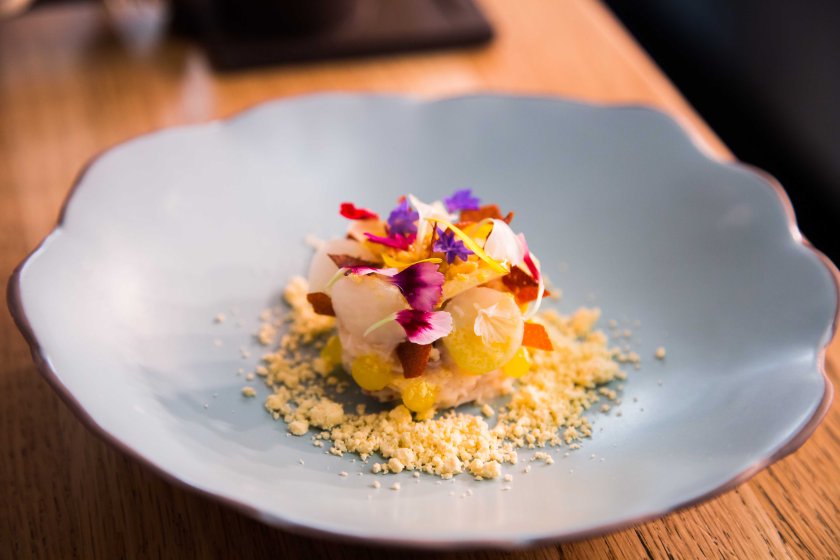 Next up, a duo of bivalves. First an amazing dish of oyster and caviar with a beurre blanc flavoured with uni. The oysters were stunningly cooked – just warm, still with a little bite, their ozoney freshness given a great hug by the urchin infused butter sauce and highlighted with little bursts of salty caviar. This dish doesn’t look much but seriously delivers in flavour. To follow, a perfectly respectable classic combination of scallop, apple and black pudding with just a hint of curry.

Vinkeles is always a joy for carnivores and I wasn’t disappointed receiving a beautifully cooked piece of veal sweetbread served with artichoke. I had watched with some interest Chef de Cuisine Jurgen van der Zalm portioning the offal when we first arrived, each piece cut with care and weighed for consistency. This is the attention to detail that makes great restaurants. The pigeon which came next I probably have eaten more than 4 times now in various guises, and I really liked the version tonight with a liquorice of beetroot and preserved blackberries. The preservation had rendered just the right amount of sweetness from them for my taste; I’m really not sure about actually sweet things with game. The liquorice itself was also an interesting idea, and the sauce thickened with liver as delicious as usual. The sauce jug was left on the table which never fails to impress – I endless bemoan that sauce is often teasingly dripped on the plate and then smuggled again away by waiters. Indeed the same generosity was shown with the following dish of splendidly fatty A5 Wagyu, which was served with a whole teapot of deliciously umami-rich dashi. 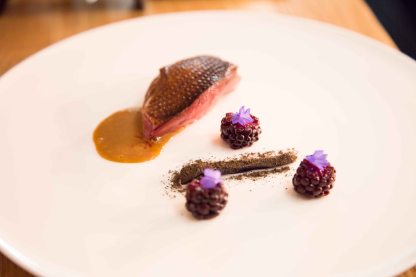 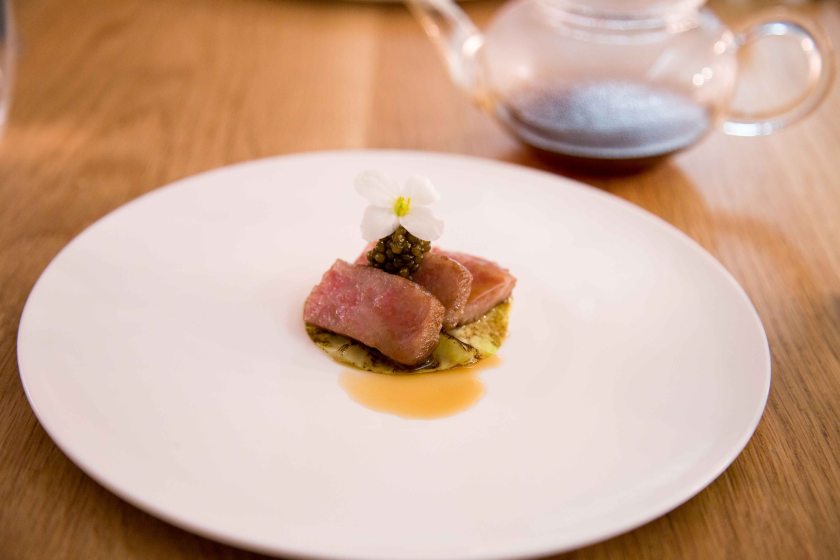 A5 Wagyu with Oscietra caviar, burnt cabbage and dashi with black garlic

As usual my faithful dining companion enjoyed the vegetarian menu whilst I was chomping on flesh. Beetroot and artichoke loomed large, appearing in multiple different guises through multiple dishes. The first, a fresh and pretty riff on the classic beetroot and goats cheese. This was followed up with a beautiful dish of globe and Jerusalem artichoke with potato and mustard. 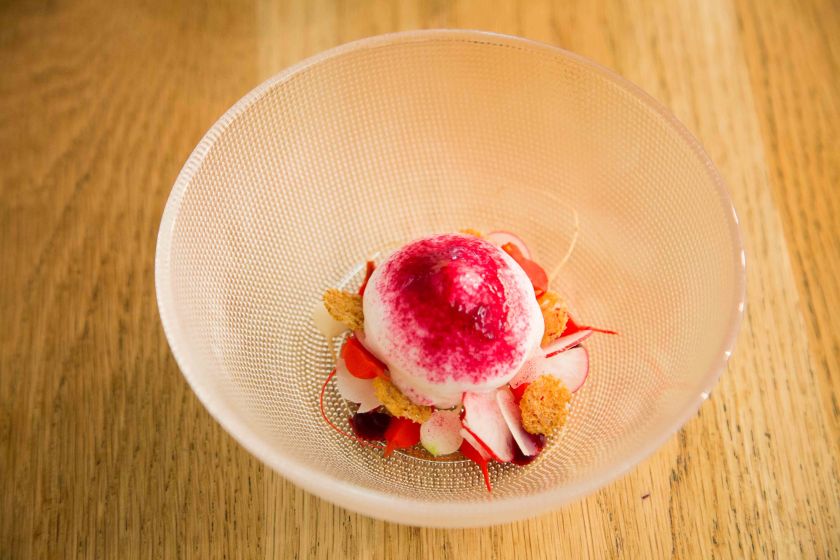 Artichoke with fried potato and mustard

With respect this is not the most innovative vegetarian menu we’ve ever seen but Nadya assured me it was very delicious. Sometimes less is indeed more. Of course as goes the saying ‘is less is more, imagine how much more more would be’. Such was the philosophy it seems with the latest dish to be introduced to the menu, which was some kind of Machiavellian masterpiece of fat. White beans, duck fat, egg yolk, parmesan, a LOT of winter truffle. I don’t think I need to say much more about this dish, it was like the best truffled carbonara and cassoulet rolled into one bowl of gloriousness.

The variety of different preparations of beet and artichoke continued now with elements from the main menu making clever appearances within a vegetarian setting. Blackberries and liquorice from the pigeon dish were reinvented into a standalone beetroot plate, then came a dedicated Jerusalem artichoke dish that flipped it all on its head.  That was now a vegetarian dish that was lending part of itself to the main menu where it appeared with scallops. Given I also often cook like this for myself and wife at home, sharing similar items on two different dishes, I found the whole process quite fascinating. No hint of laziness here, actually quite the opposite – a well planned and thoughtful sharing of seasonal ingredients to delight both meat-eater and vegetarian. And how nice that for once we could actually talk about parts of each other’s meals.

Beet with blackberry and liquorice

We had a little stumble into dessert with a pretty strange dish of rice pudding and coconut. For me it was too heavy after a long tasting menu and somewhat ill-conceived in balance. However we swiftly forgot all about it as we attacked a deliciously fresh desert of tropical fruit.

Not so succesful rice and coconut 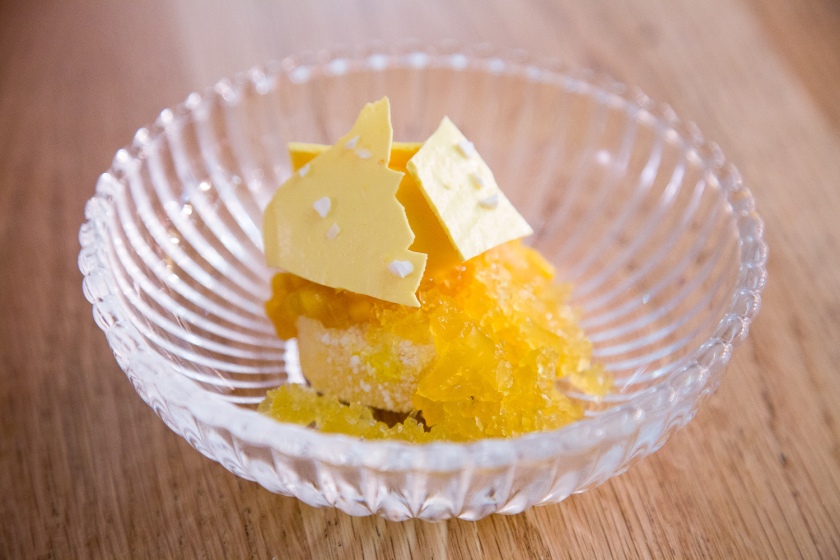 I continue to be a big fan of Dennis Kuiper’s whole team, and especially recent promotee to Chef de Cuisine Jurgen van der Zalm, who took such good care of us at our last visit from the pass. That, combined with a attentive and friendly front of house and an ever changing but always impressive menu, really combines to makes this restaurant something quite special. Big thumbs up, we’ll surely be going back again in the near future (if Dennis lets us back in the kitchen after this review)…. I only wish they’d put that pommes Tsarine dish back on!

p.s. Chef Kuipers commented that pommes Tsarine can be requested off the menu in advance. Don’t miss out!