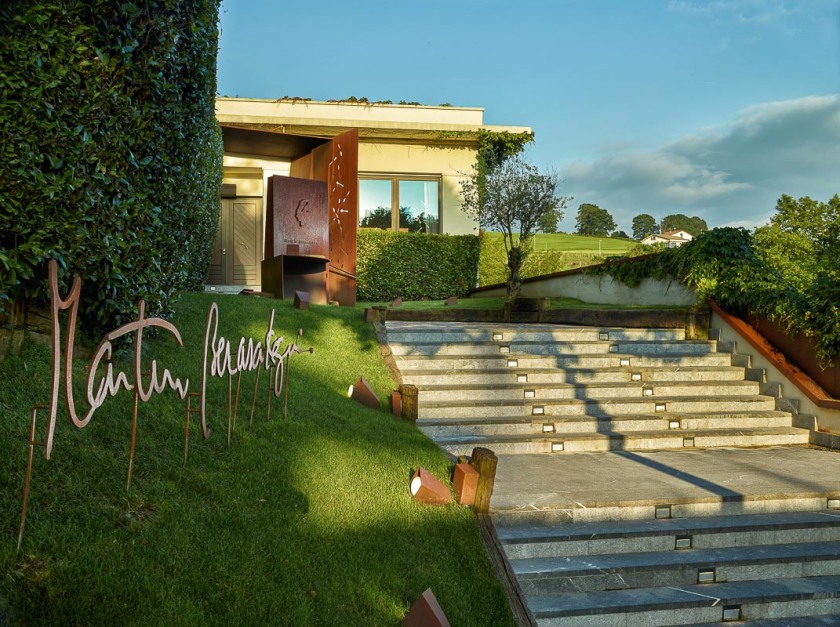 (17.5/20) Slightly under-par performance from one of the world’s great chefs

In the unremarkable town of Lasarte-Oria, about half an hour outside of San Sebastian, deep in Basque Country between northern Spain and France, stands the flagship and eponymous restaurant of one of the giants of modern Spanish cuisine. Once dubbed ‘the most famous chef you’ve never heard of’, Beratasegui may not be as well known as others internationally, but enjoys a status similar to Ferran Adria in his native Spain, where he quietly has built up a mini empire of fine dining. He currently holds 7 Michelin stars.

The accolades started early in his career when, having returned to run his family’s restaurant after training to be a Pastry chef in France, he achieved his first macaron at the fresh age of 25. And whilst the doyen of modernist Spanish food Adria gave up professional cooking years ago, Beratasegui can still be found every single day in his kitchen, commanding the troops and personally greeting his patrons. 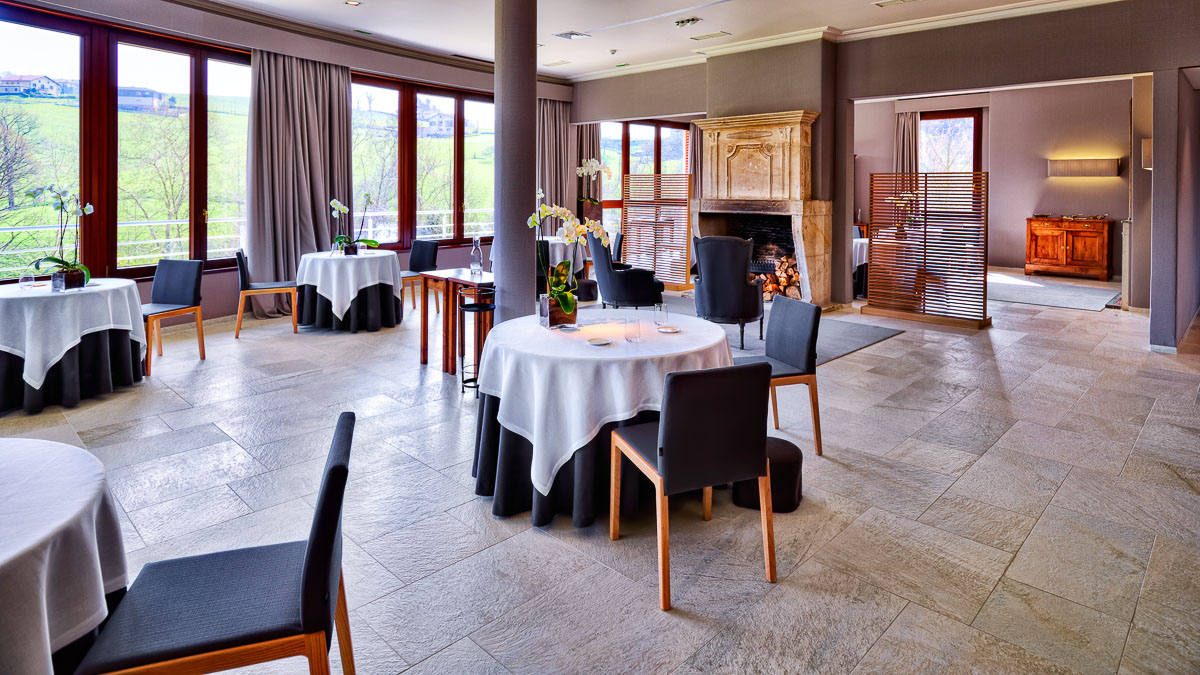 The dining room itself is spacious, full of light and, at 13:00 in the afternoon, totally empty. Such is life in Spain where only mad dogs and Englishmen deign to eat lunch so ludicrously early. Having visited Azurmendi the day before and at a similar time, we knew what to expect in terms of emptiness, but were immediately struck by how different in style two 3-stars from the same region of one country can actually be. Beratasegui’s setting is still modern, but decidedly more formal. This is certainly not Paris-stuffy, and everyone was very friendly, but it was certainly a little more stately than the welcome at his younger counterpart’s place. The poor front of house, of which there were 3-star Michelin quantities, milled around, awkwardly pretending to clean cutlery, waiting for some guests to arrive to give them someone to attend to. For the first hour of our 2 hour lunch, it was completely empty and totally silent but for our own conversation and a slightly peculiar whispering coming from a dressing screen in front of the door to the kitchen. We wondered what the waiters huddled there were whispering about; Perhaps they were questioning why anyone would bring a 4 year old to a 3 star restaurant, or maybe the discussion was over who in their right mind eats a 3 star lunch at 13:00 in the afternoon when they have a flight at 17:00 from an airport at least 1 hour away?

Thankfully our North-European paranoia about the subject matter of the hushed conversations was at least partially put to rest when a Spanish family with 5 kids of varying ages rocked up and immediately took the toddlers for a tour of the kitchen. This is one of the great joys of eating even at the highest levels in this part of the world; Children are always welcomed with sincere greetings wherever you go.

The meal itself started delightfully; We were presented with the famous rainbow offering of flavoured butters to accompany a huge variety of breads being showcased from a dedicated trolly. We had advised a few times in advance by email in the run-up to the visit that we had a flight just after lunch and so would only have 2 hours to dine, thus after a glass of champagne we moved straight to the first dish.

Looking back, for me maybe this was the best of the menu.  A great classic that has been served since 1995, and which dares to pair two of the most wonderful ingredients you can find on this fair earth together in one tiny bite. This is a dish of some machiavellian ingenuity; Both Foie gras and eel are hugely rich and somewhat similar flavours, but the light bruleeing of the top and the slither of apple sandwiched between the two somehow left the flavours separated and at once in magical harmony. Rich, full of umami, with a background sweetness, a crunch of apple which cleansed the palate, and just the right amount of freshness and acidity coming from the onion. A stunning start. 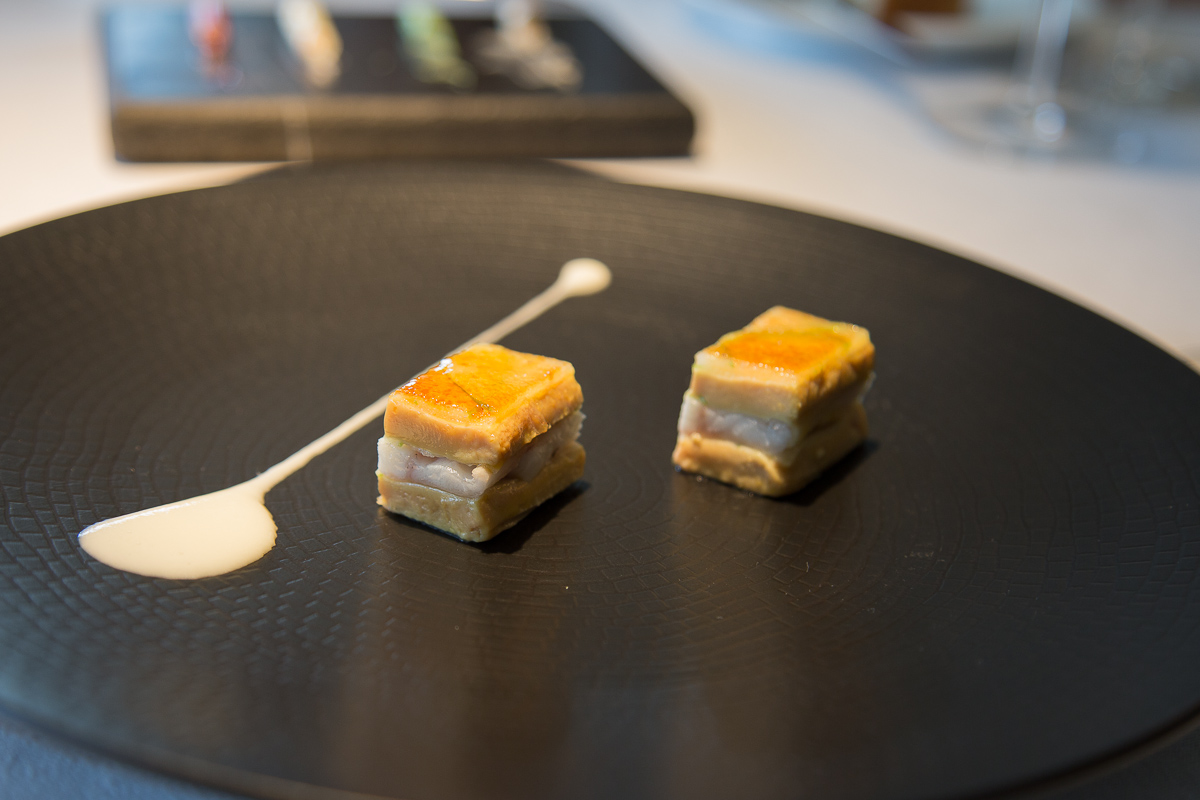 A Basque meal would be nothing without esquisite seafood, and we were not disappointed as a flurry of interesting fishy dishes were brought to table. Red shrimp royale and dill with a perfect espuma gave just a slight nod to Spanish modernist cooking without turning the meal into a science experiment. 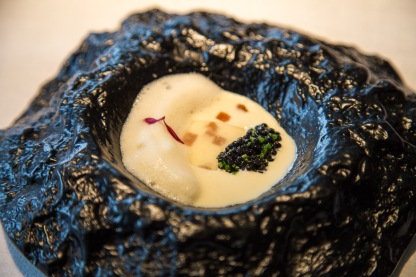 A lightly marinated oyster still with just a tiny bite came to the table with cucumber ‘slush’ (slush?!) and spicy apple, served on a bed of bubbling dry ice with scent of seaweed. This whole plate just sung of the seaside. I’m so past being bored by restaurants expecting diners to be amazed by a bit of liquid nitrogen, but in this dish it had purpose as well as theatre – the smell from the seaweed in the mist was intoxicating.

Next up was an extraordinary-looking dish of beetroot and horseradish with taramasalata. Again a slightly troubling looking foam lurked on the plate. It was perfectly delicious albeit I wasn’t entirely it was necessary, and personally I found the presentation just the wrong side of vivid. The fish eggs were however delicious and it was a  joy to see one of my child hood favourite foods in a fine dining setting. The pairing with beetroot also worked very well.

Moving towards a more fully-fledged vegetarian expression, we were delighted by a Michel Bras-eque plate of vegetable hearts salad with seafood, cream of lettuce and iodized juice. Everything worked well, especially the aesthetic which was truly visually arresting, though I found the dish ate without as much excitement as was offered by the presentation. For all the work that went in, in the end it was somewhat flat. A decent salad. 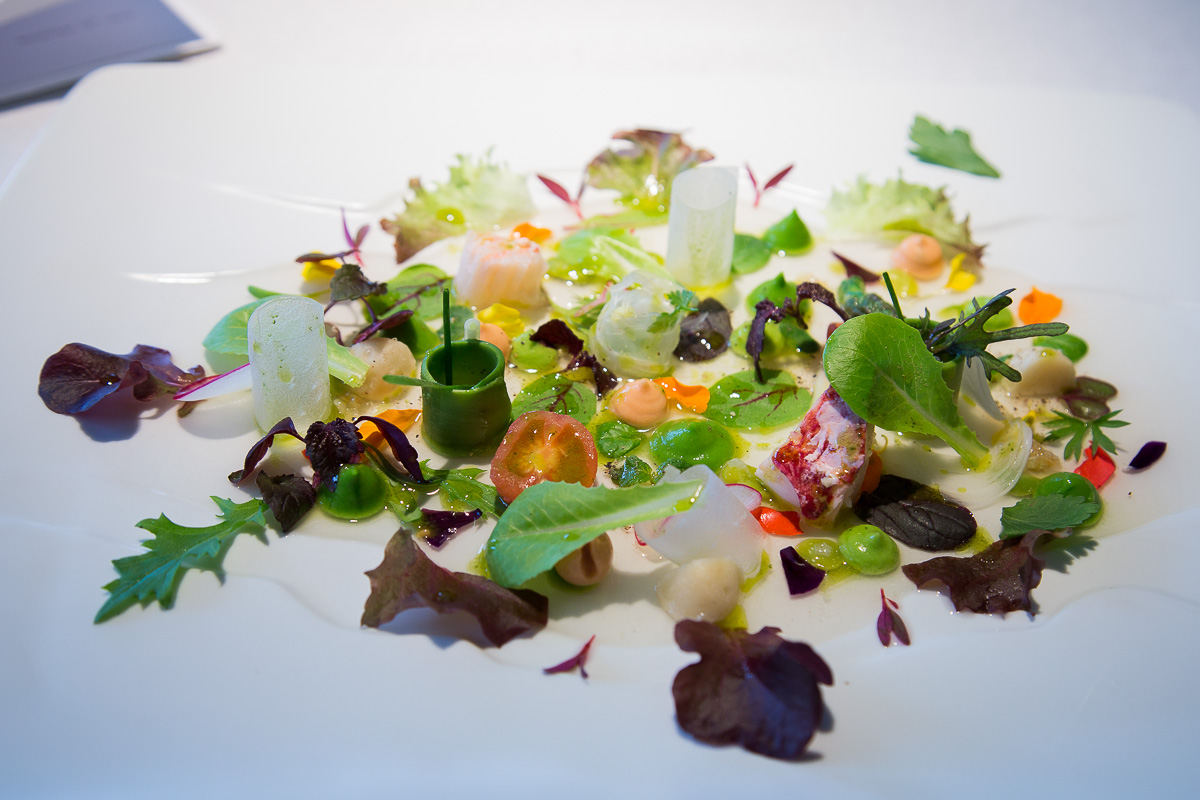 Thankfully the game was raised again with a pristine offering of Balfego tuna loin with fabulous mustard ice cream and sprouts. The plating again quite artistic and channelling the region’s close affinity with all things sea-side. This dish was a triumph of simplicity achieved with great skill and a few quite technical processes.

By this point we had a about 5 courses left and 20 mins before we needed to call a cab lest we miss our flight. The pace of eating was accelerated, and as a beautiful peace of red mullet with edible scales, fennel and liquid baby squid bonbons was placed in front of me, I listened attentively to the instructions from the waitress not to try to cut the bonbon with a knife and fork. The light casing was better tackled placing the whole thing in your mouth I was told. This I did albeit it didn’t stop it erupting from my jaws and squirting black squid ink halfway across the table. The waitress politely returned and covered my little accident with a napkin without saying a word. The was a lot of giggling. 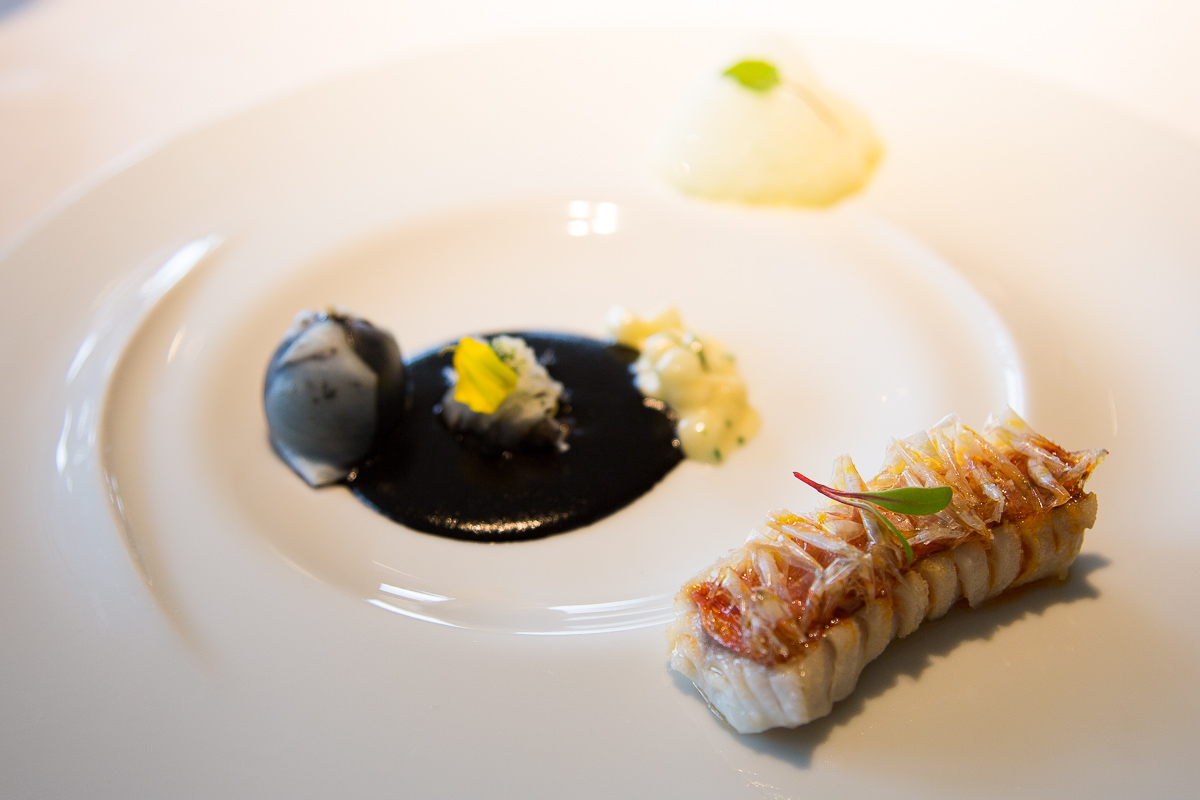 Nadya was by now mostly through her vegetarian dishes: A strange dish of truffle, fermented wild mushrooms and another brown foam which really didn’t work, an egg yolk with liquid herb which was (as usual) carefully removed from her plate and transferred to mine, and then in lieu of my meaty main course, a huge bowl of truffled linguine. Truly the portion was extraordinary. She said the pasta was perfectly delicious but it was so peculiar a choice for the kitchen to give someone in the middle of a long tasting menu, I’m still slightly shocked/irritated by it. It just seemed lazy in the extreme for a restaurant of this quality. 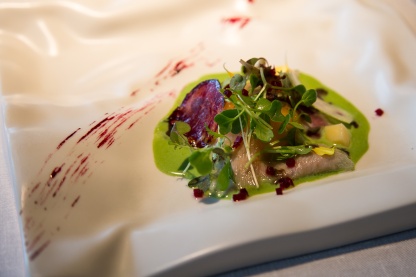 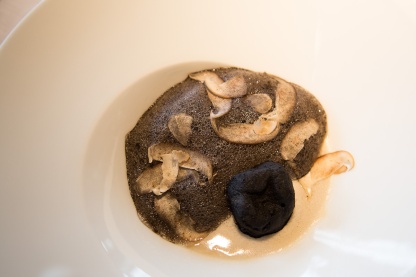 Thankfully however there was some respite from the horror of the pasta mountain with this delicious dish of swiss chard, chlorophyll and cheese bonbons, which brought the modernism back into check, using spherification to good textural effect rather than just for show. Bravo.

My meat course was a fabulous plate of young pigeon, with potato and truffle bites and ‘forgotten’ vegetables. I have to say at this stage, and now 5 minutes from when we had to leave I had given up trying to work out what the forgotten vegetables actually were, given the focus had so clearly turned to whether we were going to miss our flight. 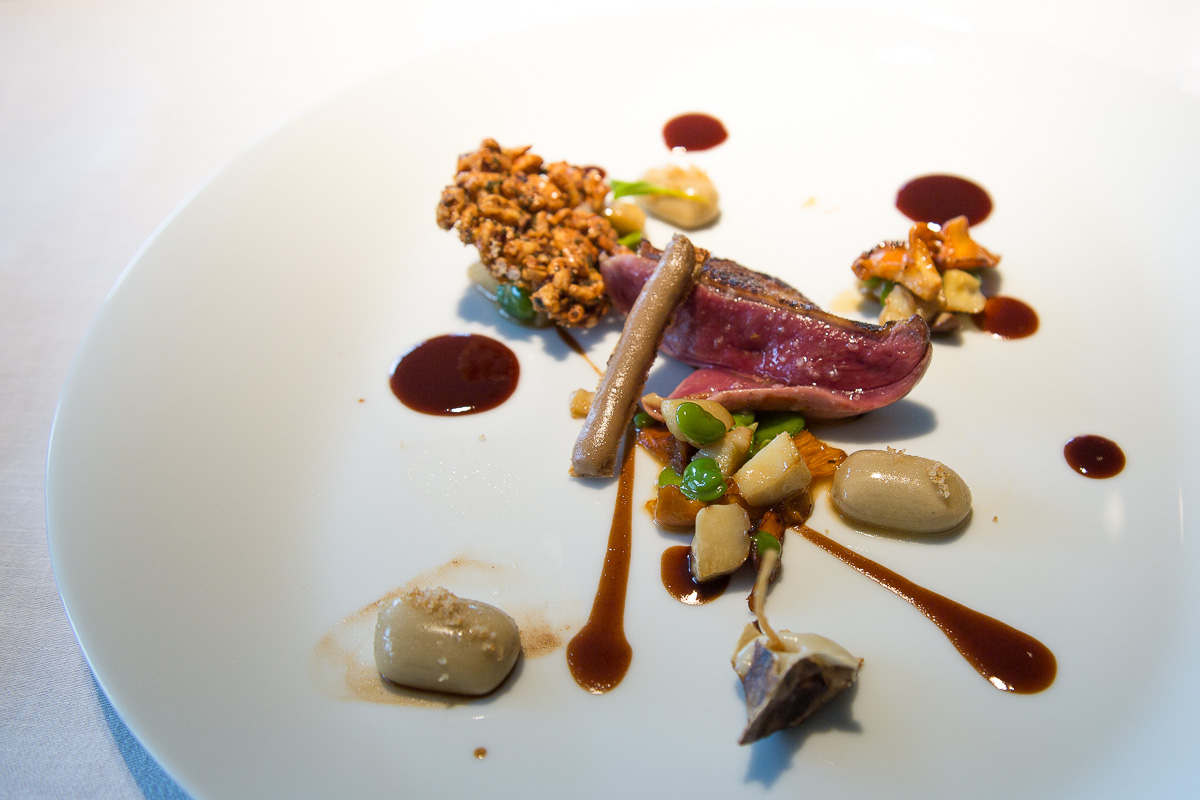 After about 10 mins of valiant effort Nadya sent back the half kilo of pasta still in her bowl, and we moved to desserts. A tale of two half; First a magnificently refreshing and clever textural concoction of  lemon with basil juice, green bean and almond. Fabulous. Next up a fully peculiar chocolate rock which cast a 2001-like shadow over its terrified companions on the plate of salted quinoa, rum slush and hazelnut ice cream. Slush again? One slush on any menu is more than enough; Here we had two.

Perhaps I was just too full and in too much of a rush at this point to give it a proper go, but for me this was a very strange ending to what had been a roller coaster of a meal.

I will be forever grateful that we got the chance to dine at one of the great restaurants in the world in Martin Beratasegui’s flagship dining room. The meal was however somewhat disappointing for me. Perhaps much of that was the painful juxtaposition with one of the great lunches of my life time that I had had the previous day at Azurmendi. Its hard to compete for any restaurant when being held up to that level of comparison. But to be fair these are very different styles and I can see the elder statesman’s cuisine being far more of a joy when enjoyed lazily over many, many, hours and a few glasses of wine. Great meals are also about time and place as much as they are about food… and we perhaps just didn’t have the luxury of enough time to properly enjoy it.