(16.25 / 20) A non-Michelin fine dining spot that really works. This is an excellent restaurant with an elegant bistro setting, serving up delicious, deceptively simple food which can often go toe-to-toe with (some of) the 1 stars in town. And all that at a very sensible price point.

Amongst the restaurant trends from 2016, which included a much welcomed and renewed focus on vegetables, was the movement to restructure the humble bistro into something altogether more modern, and something considerably more fine dining. Of course as with any revival that purposely places itself in the middle of two proven restaurant formats, these ‘neo-bistros’ still had a wide range of possible deliveries. Having started the climb from the base camp of the enjoyably mundane, where should they now pitch their tent on that long and slippery slope up towards the summit of fine dining? And where exactly was the efficient frontier for a bistro that wants to stay out of white-table-cloth territory, not replicate Michelin prices (the climb is expensive), but still give a little more creativity to its food?

Those of you who follow this blog will know that I have long been preoccupied by the perfect ratios of great dining. My major fascination, and indeed what I sincerely believe is at the heart of what makes the world’s best restaurants truly great, is finding that ethereal balance between expressive artistic innovation, and outright deliciousness. But there are, of course, all sorts of other balancing acts required of any successful restaurant format, and it is often in those ratios, which can have little or nothing to do, directly at least, with what gets dished up on the plate, where the battle is won or lost. These are the uninspiring things which really matter; Such as the number of covers per square meter, or count of front of house staff per customer.

Moreover, these other considerations don’t exist in peaceful mutual exclusion of the food being cooked. There is a strong, and I think often necessary, connection between the type of cuisine that is served and the qualities of both the dining room and the service.

“if you aren’t going to appreciate and take thoughtful pleasure in the restaurant’s food, and if you can’t hear what your companions are saying, why on earth are you paying so much to eat there?”

Last week I wrote about Daalder, a neighbourhood cafe in Amsterdam which, via the addition of a two Michelin starred chef patron, has transformed itself into a kind of ‘fine diner’. And as much as I enjoyed it, for me there was something slightly peculiar about receiving upscale plates in an atmosphere so boisterous you couldn’t hear the waiters’ lengthy descriptions. I’ve found this combination difficult in other restaurants also undeniably serving extraordinary food – I even had the same worry at Noma, erstwhile best restaurant in the world (if you really believe in such a thing). There too, in that restaurant which so famously eschewed the classic accoutrements of fine dining (“fuck the silver cutlery”), the dining room can be loud to an extent I personally found incompatible with the concentration demanded by a cuisine which was that remarkably complex.

So whilst I also give heartfelt support to the idea of more casual fine dining, and can not stand old school Parisien-style service, I also unequivocally do not believe you can successfully serve high end food with too many covers, bistro quality service, and with bistro-style noise levels.  There was some Darwinian logic behind the evolution of dining rooms; The more complex the cuisine, often the more attention people like to pay it. Go ask your local librarian, concentration and cacophonous crowds don’t mix. After all, if you aren’t going to  appreciate and take thoughtful pleasure in the restaurant’s food, and if you can’t hear what your companions are saying, why on earth are you paying so much to eat there?

Breda I think gets the mix right. These are unpretentious plates with a couple of flavours per dish, served in a sparse, light and airy dining room. But don’t be fooled by the minimalism, this is thoughtful cooking into which a lot of time and effort has clearly gone in. You won’t find starched table cloths here or fussy, over-attentive, service. But there are a sensible number of covers for the space, proper chairs and a quietly confident atmosphere that lets diners take the time to pay attention to what they are eating. Of course being situated bang in the centre of town in a beautiful canal-side location also means the prices need to support the presumably inflated rent, but at around 10 euros a plate I certainly don’t find the rates excessive (at all) for the quality coming out if this kitchen.

This was our third visit to Breda, the second restaurant from the Guts and Glory duo of Guillaume de Beer and Freek van Noortwijk, who interestingly enough used to also run Daalder (pre my recent visit). As per the other two restaurants, it also doesn’t have a menu to speak of, so you choose how many courses you want and get what you are given. As I recall fondly, this was one of the first upscale restaurants I had ever been to that actually dared serve a dish with a decent kick of chilli heat. We loved it from hello, and it still tops the list of places we go to for clever dishes outside of the Michelin stable.

Take this amuse for example: It was all things carrot showcased with the unmistakeably confident simplicity of a top notch kitchen. A simple plate of perfectly cooked carrots (texture), served together with a deeply flavoured soup (essence). The triptic completed with a carrot cracker with carrot cumin humus (artistic twist). In sum, all things carrot, and just the right amount of side spin to keep you on your toes and keep your palate interested.

We had picked Breda as a kind of half way house for lunch with well known local food writer, Vicky Hampton (Amsterdam Foodie). She is, I think it’s fair to say, decidedly less focussed on the fussy end of the dining spectrum than this blog, but nethertheless it had been an easy choice. We’d both been before, Vicky already having waxed lyrical about the place on her own website. And to have such immediate agreement from two quite different foodie focus points is in itself testimony to something being right in the pitch of the concept. This really is somewhere successfully inbetween fine dining and mid range bistro fare. I’m not sure what Daalder 2.0 was like, but I like Breda a lot.

The first dish turned up. Mackerel hiding under a blanket of daikon, with a hint of sesame, apple and coriander. Freshness from the radish giving a necessary balance to the oily fish, plus the vaguely theatrical touch of hiding the main ingredient. Normally I prefer to see what I’m eating, but somehow the cover-up worked here, the disks of diakon set off beautifully against the dark plate. Moreover, the sesame added an interesting background nuttiness which helped transform this overtly simple dish into something far more interesting.

We discussed our previous experiences at the restaurant, also touching upon the confident simplicity of the food. We had both been when they had recently been serving a runner bean amuse, which had tapped into fond childhood memories for Vicky. Make that kind of connection as a restaurant and you’ll have fans for life.

Mackerel with daikon and sesame

The deftness of touch returned with a beautiful dish of perfectly cooked creamy haddock, steeped in a coral beurre blanc, with oyster, kale and a purée of spinach. You don’t need me to tell you all these things go perfectly together, the loitering kale conspiring to give both a slight bitter note and textural contrast to what might otherwise have been an overwhelmingly soft and buttery bowl of deliciousness.

Next up, an exercise in minimalism with a perfectly cooked breast of lamb, curried lentil, black garlic, and turnip tops. Lovely and pink, the meat still giving that firmness I adore in this cut, whilst the slight spicing gave a background nod to classic middle eastern/ indian parings of lamb with chickpea and cumin. Subtleness of flavour is not however what this restaurant is about, and the sweet and sour black garlic sauce came storming in at the end with a swift upper cut. Knockout. 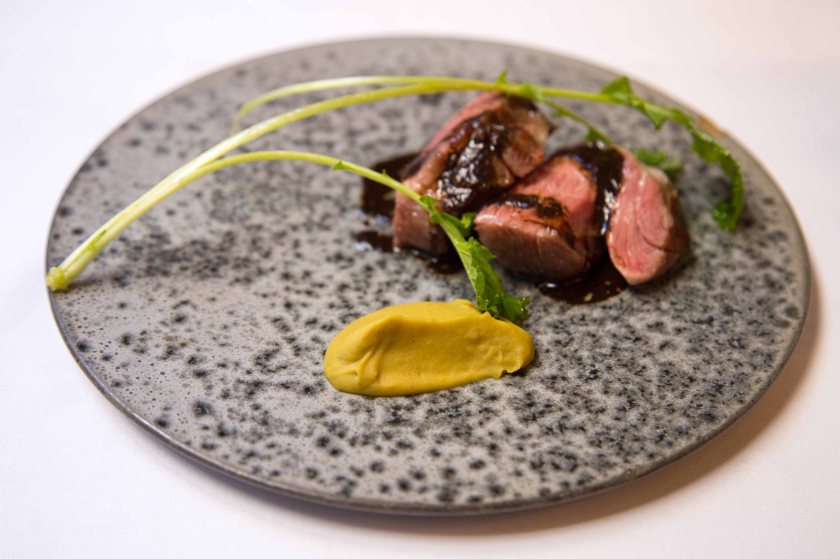 Last but not least on our short 4 course lunch, a beautiful smoked vanilla ice cream, very clever olive biscuit crumb, with just a hint of rosemary, and a not overly sweet caramel – making something that is essentially 90% sugar well balanced for sweetness is quite a feat in itself. The texture of the ice cream was impeccable (you can see in the photo it just starting to go after being made to wait around as I faffed about taking 20 photos). 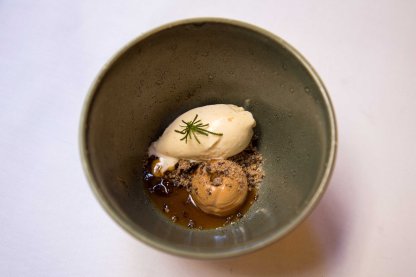 And that was that. So, spoons now back down on the table, finished up, we said our goodbyes and biked happily off into the distance, firm in the knowledge that it wouldn’t be too long before we said hello again to this fabulous restaurant.